Japan vs. Korea - Where should I teach English? 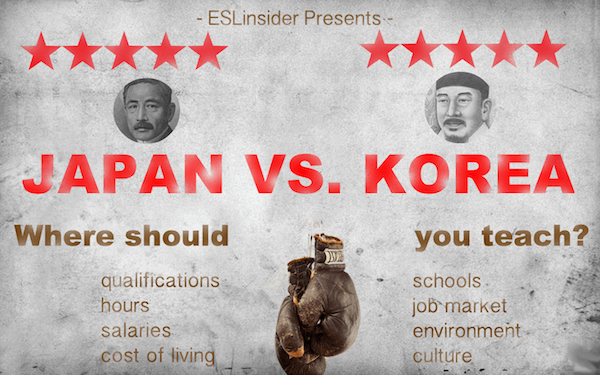 Japan vs. Korea? Thinking about teaching English in Japan or in South Korea? Here's a look at some of the differences between teaching in the two.

I spent 3.5 years teaching in Korea (Busan and Changwon) and I lived in Fukuoka, Japan for nearly 2 years.

Are you qualified to teach in Japan or Korea?

The basic requirements to teach English in Japan and in Korea are to be a native English speaker (not always in Japan) and to have a university degree. Those are for your visa. TEFL courses are not required by law, but some schools can prefer them. A good targeted course will also help you do your job (more on that later).

In Korea you also need to get an FBI background check and an apostilled diploma. Korea is a little more difficult to get into because of these. Although a program like JET has a long application process.

Both countries have relatively similar work schedules. If you teach in a private school then you will usually work from 2-9, 3-10, 2-8pm. If you are teaching adults you may have morning/daytime hours and the same in a kindergarten.

If you work in a public school with JET or EPIK then you will have daytime hours from about 8:30-4:30.

There can be individual differences, yet there are similar kinds of schools in both Japan and Korea. Your options are mainly to teach in private schools, public schools, or in universities.

Which job market is more competitive?

More people want to teach in Japan. Yet, I'd say there are probably fewer jobs there. Here's a graph I made from Google Trends.

To get a job in Japan from outside of Japan you would probably have to go through a program like Jet or through a company like: ECC, AEON, Interac, etc.

You would actually be better off to be in Japan to look for a job and it's not as expensive as you think if you do it right (more on that in a bit).

You can check this page out for more websites on finding a job in Japan.

It would probably be easier to find a job in Korea. Korea's market is pretty good aside from the shrinking public school sector. ESLcafe is good site to look for a job in Korea.

For either place I would recommend reading this post on how to get a good job teaching English.

Where are you going to make the most money?

You will probably make and save the most money teaching in Korea. Korea has a lot of nice benefits including: airfare, housing, severance pay, pension pay and a monthly salary averaging 2,100,000 Won which is close to $2000.

In Japan the average salary is around 250,000 Yen ($2,400) a month which is a bit more on average than Korea's salary. Last I knew the JET program paid 280,000 Yen a month possibly with some benefits such as airfare and housing. Like their disclaimer says every situation is different.

Where are you going to spend the most money?

Well, that depends on you.

Most people say Japan has a pretty high cost of living, but I lived there and my cost of living was pretty low. I paid about 30,000 Yen a month for rent ($300) and then maybe another $3-400 in utilities and food.

So it's pretty cheap for me, but it depends on you. I came here without any situation lined up and I put it together myself.

Korea's cost of living is pretty similar depending of course on you, but since you'll have free rent you'll probably save more in Korea.

Japan has higher start up costs because you often have pay all these fees to rent an apt: guarantor, agent, key money, deposits, etc. to move into a place. I paid 93,000 Yen to move into my place which was like $900, but others had higher move in fees upwards of $1500 or more.

I'd say similar, but as you can see from the map Japan has more extremes.

Korea is pretty mountainous with cold winters and snow in most places. If you are in Busan or in Jeju you probably won't see snow. The summers are hot and humid.

Japan is also pretty mountainous with a fairly diverse environment with snow and cold in the northern parts. It's a little warmer from Kyushu on down to tropical Okinawa.

I saw snow fly one time a season in both Fukuoka and Busan. It didn't really stick though.

I didn't think Busan was very polluted when I lived there although it's more polluted compared to nearby Fukuoka. And I see a lot of people complain on Reddit about pollution in Seoul and the nearby area.

Basically the western part of Korea including Seoul will be more polluted and some of that is coming from nearby China. Northeast China is the most polluted part of China.

I think Koreans tend to speak a bit more English than Japanese. I think there is more of an emphasis on learning English in Korea and that might be why there are more jobs or part of the reason.

But wherever you go it is a good idea to learn the language as it will make your life outside the classroom.

Which is more international?

I think Japan is more international. It's international in the sense that it has been influenced by America for a longer period of time. Which brings us to the next point...

There is more diversity in Japan as far as fashion, music, art, and architecture goes. It's more westernized and has been for a longer period of time. You'll see more diversity of fashion styles there, international musicians and artists go there, and the architecture generally looks better than Korea's.

Neither one is America though, so you can still experience culture shock if you are an American or not.

How are the people different?

From what I have gathered from others is that the Japanese tend to be more reserved and the Koreans a bit more emotional and expressive. But Korea and Japan are really not that different.

Is it better to teach English in Japan or Korea?

It depends on you and what you value. But I'd say most of the time Korea will be better for money for most, but other than that Japan is better. I like Japan a lot better and most people I've met prefer Japan over Korea. Korea is a bit on the drab side for me, but some people like it.

If you are at the stage of picking a place to teach then one of the following stages will be the actual teaching. Before you know it you'll be walking into a classroom full of students. How do you want to feel?

Get totally prepared to conquer teaching English in Japan and Korea

This course is focused on teaching English to mostly kids in Asia (7 out of 10 jobs). Kids are the tougher age group to teach, but most TEFL courses don't focus on teaching kids. They are usually focused more on teaching adults.

But this practical course focuses more on teaching kids in East Asia.

Do you want to have a better experience teaching English in Asia?

Because this course will make a difference.