Taiwan vs. Korea - Where should I teach English? 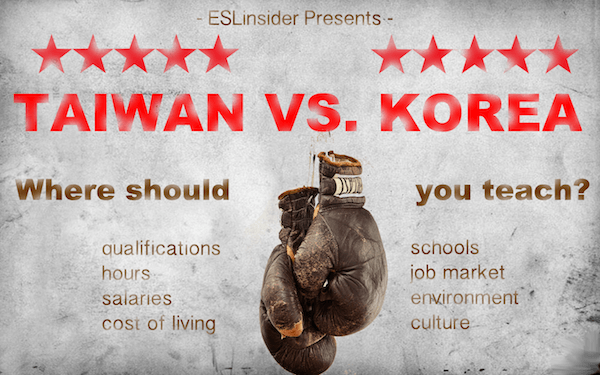 Taiwan vs. Korea? Thinking about teaching English in Taiwan or in South Korea? I have taught in both and this article should help explain some of the differences between the two.

If you don't have the above qualifications then you can read more on teaching English without a degree.

I think teaching in Taiwan tends to be a bit more easygoing across the board, but it does depend on which schools you are comparing. If you teach English in a private school (buxiban) in Taiwan you may be working on the weekends and you will have maybe one or two days off during the week.

In my experience weekend hours are usually just Saturday mornings, but it does depend on your school. Buxibans are after school programs with hours ranging from about 3-8pm or so.

In Korea public schools and hagwons will have a Monday to Friday schedule. In private schools (hagwons) hours are commonly 2-9pm. If you teach in a public school with or without the EPIK program then you will work during the day from about 8:30-4:30.

You'll most likely make a better salary teaching in Korea. Well your actual salary could be similar, but in Korea there are a lot of benefits such as free housing, severance pay, airline tickets, pension pay and a good salary (of around $2000 or more a month).

In Taiwan very few schools offer any benefits such as free housing. The average wage is NT$600 an hour. If you are getting paid a salary at a buxiban then you could expect to make anywhere from about NT$50,000-60,000. Public school teachers make around NT$65,000-75,000.

In Taiwan you will normally need significantly more money to get started as your initial move to Taiwan is not covered by a school. You will need to pay for a ticket and other start up costs.

My classes at a public school in Korea ranged from small after school (late afternoon) classes of 8 students or so and larger classes up to 40 students.

Private schools are called hagwons in Korea and buxibans in Taiwan. These are private after school programs. Most of these have hours after the students attend regular school. These tend to be afternoon and evening jobs 2-8, 2-9pm or so. Elementary students are the primary age group. Yet the students can range from kindergarten to adults.

Kindergarten jobs are in the morning and afternoons. In Taiwan these can be pretty good gigs. Some teachers get a couple of hours off for lunch and then return for a few more hours. In the afternoons they usually teach elementary kids.

Public school job positions in middle and high schools in Korea have been cut which marks a shrinking market in the public school sector in Korea.

Taiwan is a pretty small island. You can drive from the north of the island to the south in about 6 hours. It rains more in the north of the island. The western part of Taiwan is very urban, populated, not always attractive and pretty flat. The interior is mostly rugged mountains that go up to 12,000 ft. The east coast of Taiwan is quite beautiful and contains some nice beaches.

It can get pretty hot and humid in Taiwan. You won't see any snow unless you find yourself up by Alishan.

Korea is pretty mountainous and fairly small. You can travel by fast train from Seoul in the northwest to Busan in the southwest in less than 3 hours. Snow is common throughout the country and the weather in the winter is pretty cold in most places. The most mild weather would be in Jeju.

I look at it like this: Taiwan is more majestic, tropical, spectacular and exotic. Korea is a bit cleaner and less polluted.

Taiwan has a problem with pollution. Scooters are the main problem. There are millions of scooters in Taiwan which can be loud and can create pollution. Korea has some pollution too, but it is cleaner.

Mandarin is the national language in Taiwan. Yet, Taiwanese is also spoken as are a couple of other dialects. Mandarin is the most spoken language in the world. So in terms of numbers and places where you can speak Mandarin it's a more practical language to learn. Korean is only going to help you in Korea which is a pretty small country. Many people find Korean to be easy to write and read.

Mandarin is a bit more useful as it is spoken throughout China, Taiwan, Singapore and in Chinese communities across the globe. Korean is a more regional language.

Taiwan is more foreign friendly than Korea is. It's more open to foreigners than Korea is and it is a bit more accepting of differences than is Korea.

Eastern Asia is a pretty fast moving place. People work pretty hard and long hours. Despite this I would say that Taiwan is a bit more laid back. It could be just me, but I hear more positive things said about Taiwan from other teachers. Most people go to Korea for the money.

You can find foreign food and options (bars, clubs, bookstores, etc.) in both places. Remember when you choose a location the larger cities are going to have more options. Smaller cities and more rural places will have less options. Smaller places can bring more culture shock.

Get the INSIDE SCOOP on teaching in Asia

This course is focused on teaching English to mostly kids in Asia.