Is Teaching English In China In Your Near Future? Let's See If It Is

What is it like to teach English in China? I taught in Shanghai, China as well as in Korea and Taiwan. In this post I'll touch on the lifestyle for teachers, the environment, culture and even include a video with teachers in Hangzhou and Xiamen.

The cost of living in China can be quite low depending on where and how you live.

I'll also do a bit of comparing to other East Asian countries like: Taiwan, Korea and Japan.

It's rich and poor

China is changing faster than any other country. It has one of the fastest growing economies in the world. It's both rich and poor. You'll see some people driving Maserati's, others push carts and three wheeled bikes.

As you have already heard China is pretty polluted.

The average person is not that environmentally aware and many are completely careless. While out for a walk it's likely that you'll see someone just throw their empty cup or soda bottle in the street and nobody (except for you maybe) will say anything.

In a local restaurant - not a fancy one, customers will throw their napkins and cigarette butts on the ﬂoor.

It's no big deal.

On a positive note things are changing and you'll ﬁnd loads of electric bikes here. I have also seen electric buses and windmills in Shanghai, which for a megacity is considered much cleaner than others less than half it's size since there are no factories in the city.

So it seems as if things are getting somewhat better. You'll also ﬁnd trash and recycling receptacles on the streets. Oddly enough in Korea you'll be hard pressed to ﬁnd a public trash can on the street. 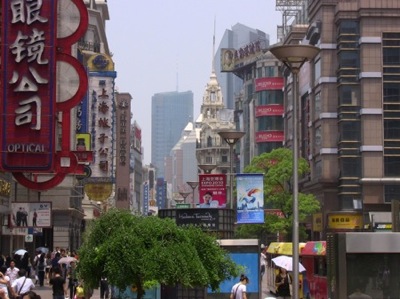 What kind of city do you want to live in?

Life and salaries for teachers will often be different in a small city than it will be in a megapolis like Shanghai. You'll ﬁnd more opportunities in Shanghai, Beijing or in Shenzhen for ﬁnding higher paid work yet there can also be more competition here.

Living in a smaller city can be more of a cultural experience.

Learn more about how to choose a place to teach.

What kind of school do you want to work in?

You will have the choice of working in a public school, a private institute (training center) or university with the later usually more difficult if you have no experience. Although getting a job teaching in a university in China is easier than doing that in Korea, Taiwan or Japan.

I would say that most jobs are in the private school sector. These will include positions for teaching adults, teaching children in an after school setting or kindergartens.

Most positions are for teaching children. See DATAFL.

If you are considering taking a course then I would take one focused on who you are going to be teaching. If you teach adults then most TEFL courses focus on teaching adults.

China is steeped in history and you'll ﬁnd loads of historical monuments/buildings here. Given it's history, it's changing faster than the other three places. However, it's government is still changing relatively slowly, like many other governments in the world.

Unfortunately most of Taiwan's and Korea's historic buildings have been decimated. Lets hope the same doesn't happen to China.

And there's a "Firewall"

Along with the "Great Wall" China has a "Firewall" and what you can access online is somewhat censored. They have become more open, but there is no access to websites like Facebook or Youtube here. There are ways around that, but the internet is still pretty slow here (in my experience).

Do I need a degree to teach English in China?

Usually you do, but I'd say China is one of the easier countries in East Asia to find a job in (of the 4 mentioned here on ESLinsider) if you don't have a degree or you are not a native speaker. Easiest doesn't necessarily mean it will be for you because most jobs will require or prefer a teacher who is a native speaker and who has a degree.

That is what you will usually need for a Z visa. That's the type of visa you need to teach English.

I lived in Shanghai, China for more than 6 months. I also did some traveling around Shanghai and went as far south as Xiamen and over the years I took many short trips for visa runs to Hong Kong.

I found China to be surprisingly more open than Korea. It could have been because I was in Shanghai, but even though it's a communist country it didn't seem so different. I enjoyed speaking and learning more Chinese which I started in Taiwan.

I found it to be a bit crude though with all the spitting and hawking. I might go back to travel or visit, however I don't think would live there again.

This is Ed. He used to teach in Xiamen.

"...Especially in Xiamen, the living standards are cheap. You can make less than $2000 and you would only be spending 3 or $400 a month. Initially the school helped me to find suitable housing, but later on I looked for my own apartment."

It depends on the school. Some of those are mentioned above. If you teach in a kindergarten you will work in the mornings and afternoons and usually have the weekends off. However, if you work in a training center you will often work in the evenings and on the weekends.

If you teach in a public school you will likely work 8-4 M-F.

Can I teach without a degree or if I am not a native speaker?

Yes, but it's usually illegal without a degree and sometimes not if you are a non-native (I've known many NNES from Europe who taught on Z visas). The legal visa for teaching is a Z visa, but some schools may hire you on a F visa which is a business visa and not actually for teaching.

Pretty cheap. Although it varies. Foreign foods will be expensive and rent and other things will vary. Like other places the cost of living is higher in the big cities. But you can find noodles and street food for a few bucks.

Here's an example for Shanghai's cost of living.

Many schools include free housing.

What are the age range of the students?

It depends on the school and on who you want to teach. The majority of the jobs out there are for teaching to children aged from about 5-14 years old, but you can teach preschool, teens or adults if you like.

What sort of programs are there to teach in China?

Normally, you can teach in a public school (large classes) or in a training center. A training center is a private after school program. Some of them can be for adults, mixed age ranges, but most are for teaching children. There are also kindergartens.

What does the street Duolun lu in Shanghai look like?

Probably not one of your questions, but here's a peek anyways...