This same person had a similar review site scam before that I'll tell you about later. He calls himself either "Mia Williams" on Trusted TEFL reviews and "Paul Murphy" on TEFL online pro. He uses the review site to write fake reviews on his competition. And he writes fake reviews promoting his other site TEFL online pro along with some fake award.

So why am I writing this?

To tell the truth.

Plus the guy who owns these two sites made up a bunch of lies about me and then has the nerve to copy me and actually all his names for his sites are copies of other industry sites that I will show below. I also previously wrote about Trusted TEFL reviews on Reddit.

And I am not going to keep turning my cheek.

"Trusted" TEFL reviews makes a lot of claims about how his reviews are supposedly more legitimate than others. And he acts and talks online as if "Trusted TEFL reviews" is some extraordinaire site or big company.

He is a fraud.

And it's obvious as you will soon see.

His name is Neville David Thomas.

He has had scams before.

How do I know?

Your first clue is the fact that if you search for information on who is Mia Williams "co-owner of TTR" you won't find much. That's because it's a fake name. And people who don't want to reveal their identity either make anonymous comments or they might go so far as to make a fictitious one.

You can do a search for:

Your second clue can be found on Trusted TEFL reviews.

Go look for the "Teacher's choice award" there and see who won.

That's a good way to trick people who have no idea.

Of course TTR is a review site so he tries to make it look real, but I can tell you that a good deal of those reviews there are fake and written by him.

Here's a fake review on his site. 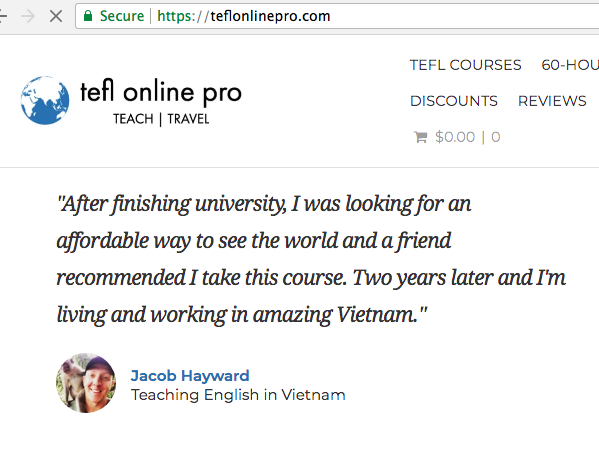 How do I know it's fake?

Does it look like a normal review to you?

Well, I had my doubts to begin with, but I read it and that suggests that the person who wrote that took the course 2 years ago, but when I checked the Who Is record (public data on websites) it said the site was not that old.

You can check the Waybackmachine and see that review has been there at least since May 2019.

First let's take a look at the whois public records.

That's only 11 days between the creation of both Trusted TEFL reviews and TEFL online pro.

Where are TEFL online pro and trusted TEFL reviews hosted?

So where is Trusted TEFL reviews hosted? 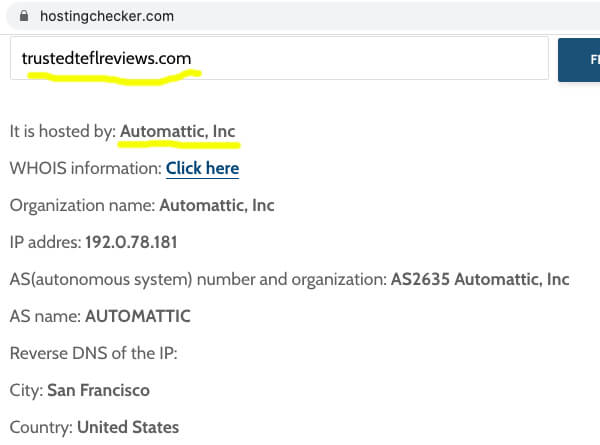 So I used a tool to test this called hostingchecker and it will tell you where these sites are hosted.

Where is TEFL online pro hosted? 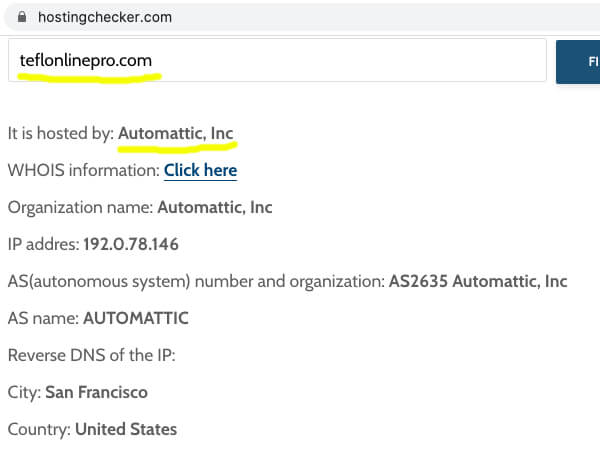 You will see that those two sites are hosted on the same website host called Automattic as of Sept. 2020.

I just found this lie on Quora where he said TEFL online pro has been around since 2010. 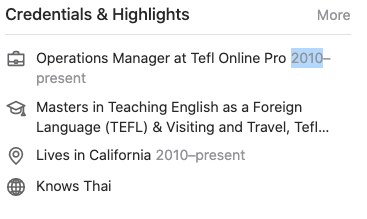 But if you look at the whois you will see it was created on 2019.

Here are a few photos posted by someone else on complaint.org. In the first you'll see him recommending TEFL online pro on Facebook. 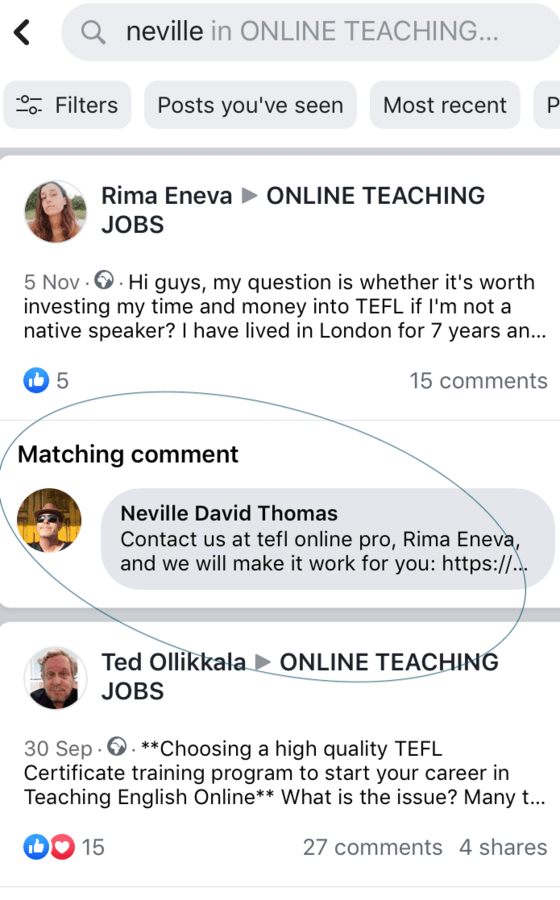 And in the second here you can see him recommending "Trusted" TEFL reviews. 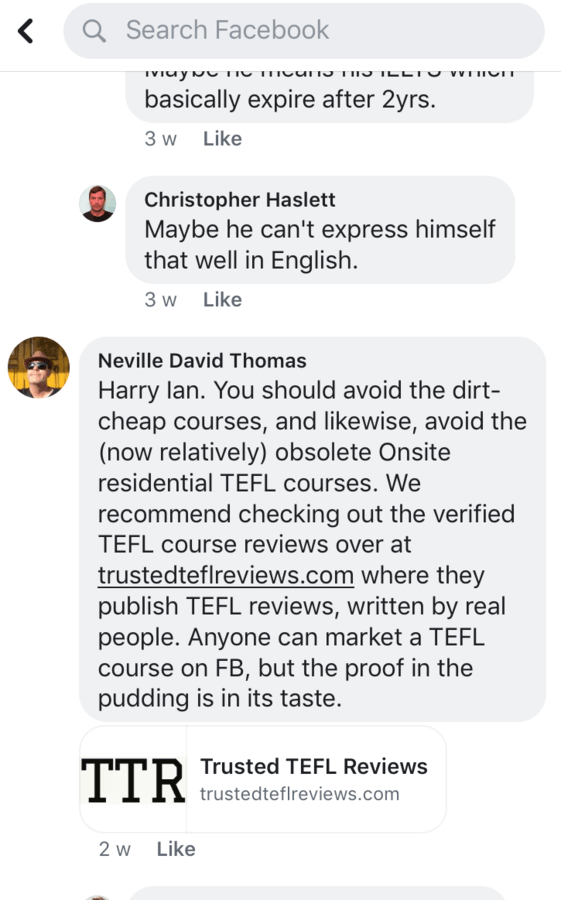 But in this post that you are reading now I have linked to some below.

That post about TEFL online pro on r/tefl was not written by Neville. Although he later went in and commented on them and then later deleted them which you can see there. 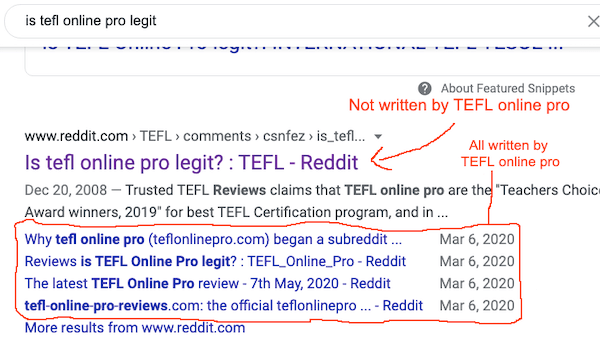 Someone told me who "Mia Williams" really was...

Not long after I wrote that first post on Reddit about him someone came forward and told me his name. They didn't want to reveal their identity so I won't. Here are some of his comments sent to me in a message on Reddit.

[–]from (username deleted) sent 7 months ago

Trusted TEFL Reviews is most likely run by a man named Neville Thomas. I took his online course years ago and he got caught making tons and tons of fake reviews and fake review sites. His nickname with grads was Neville the Devil. This all seems like his work. His previous fake review site was https://teflonlinereviews.wordpress.com/

Seems pretty similar to what's going on with Trusted TEFL Reviews right? Same feel and same language. Same woman who comes out of thin air and totally is biased towards one course in particular. Anyway, I followed a rabbit whole and found you...

My issues with him are in the past and I don't like dealing with crazy people. I looked at the review site and I'm sure most of the negative reviews are fake. God, it's so similar to what was happening 5 years ago.

At the time, his previous course was called ITTP. He's a strange and relentlessly crazy man. This is just speculation on my part, but if you check him out, there's a good chance it's him. Maybe reach out to the other online courses. I am sure they are aware of who he is and what he's done in the past. Good luck (and be careful).

Another message by the same person:

I noticed people were being attacked and I knew it was him. TEFL Online Pro and Trusted TEFL Reviews are all the same person and owned by Neville Thomas. I guess it's because it's not my deal anymore. I just figured you might want to put a potential name to the person is going after you and kind of warn you that this guy is all about creating false identities and attacking people.

Here's another site that talks about his previous review scam.

He copies other people's content and reviews. I've even seen him copy ideas and parts of reviews from my site. He attacks other people, companies and writes fake reviews.

Here are some of the names he's created which are very similar to other companies in the industry:

That's how he blends in.

ITTP and teflonlinereviews are now defunct.

This is an industry of copycats in one form or another and there are a lot of lies.

UPDATE: He sent me a few emails...

So like I expected he found this and contacted me. I am pasting his emails here...

Do you think I am actually scared of this? Of course not because he'd have to show his face if he was dumb enough to try any sort of legal action and his whole scam would be revealed.

The lobster conundrum (an after-thought)

Do you really want to remain stagnant as lobster No.39?

We can see from our visitor stats that you have viewed the warning of ESLinsider.com.

This warning has been published, based on legitimate grounds. If the details of the warning are untrue, we will delete the warning.

I really don't understand why you have chosen to start defaming trustedteflreviews.com. We are aware of the defamation laws in Japan and will proceed as necessary.

Personally, If I were you, I would have a graduate of your program submit a review to trustedteflreviews.com as then we would be able to confirm the legitimacy of your school, and the warning would be deleted - plus any other comments I may have posted online about ESLinsider. ESLinsider would also jump in the school rankings and would further jump with each new review received. It is a well-established fact that the higher the position of a school on trustedteflreviews.com, the larger the increase in a school's website traffic and ultimately a larger increase in business for that school.

At the moment, though, you are in self-destruct mode and your behavior has created a lot of red flags for us.

We hope you decide to begin acting more professionally. If you did choose to continue down the same path, we would need to respond in kind.

So more recently he has been uploading review videos to his channels. These video "reviews" if you want to call them that are being uploaded to Youtube, Reddit, etc. Those people aren't making those reviews and publishing them to their channels.

And why is that?

I can't think of any other reason than they were paid to do it or perhaps compensated with a free TEFL certificate.

Have you ever created a review and sent it to the company to upload?

All of these were created in a short time. 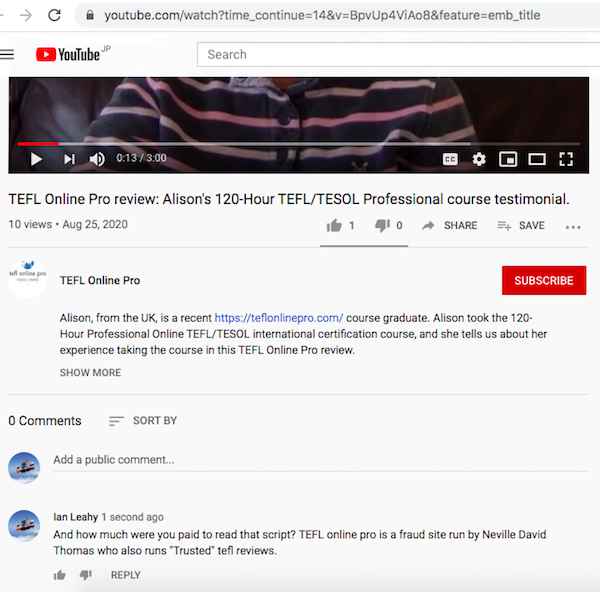 So he got someone to buy his course and make a video review, but it's obvious she is reading a script so I am sure she was paid to do it and that is similar to some of the video reviews of myTEFL I've seen.

No, and the person running this site is a fraud where he uses fake names, fake reviews and other deceptive tactics to deceive people.

A lack of it isn't a guarantee of anything as accreditation can be faked too. But everything mentioned above should have shown you that this is a fraudulant site and for some reason it didn't then see the links below.

Why am I writing this post on TEFL online pro and "Trusted" TEFL reviews?

Below I'll show you 7 different websites that he either owns or used to slander my name.

Search engine results do change, but here are some examples of what I found today all written by him attacking me online.

Ohh, and by the way it's not only me he writes $#@! about, but he seems to have taken a liking towards trying to deface my work.

His writing is a whole lot of projection. Says here that I go by the "identity" of Ian Leahy, yeah since my parents named me that.

So that one was on "Trusted" TEFL reviews and here is one by him on his new site "tefl-online-pro-reviews.com".

The fake "Teachers' choice award" is on his other site "Trusted" TEFL reviews. One way he promotes his course.

In this case he copies the title of a post in the related links below. 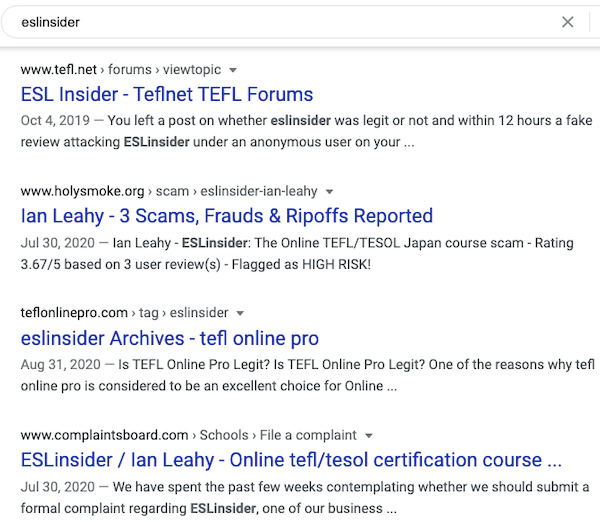 And here is a slew of them he wrote on 4 different sites. TEFL.net was his post under the fake username "Mia Williams".