There is a lot of fake news out there in TEFL land. Definitely don't believe everything you read especially when you don't know anything about who wrote it.

This video will go into detail about all the fakery going on online and this post will touch on fake TEFL news and fake TEFL course reviews.

"What’s gone from the internet, after all, isn’t “truth,” but trust: the sense that the people and things we encounter are what they represent themselves to be."- NYmag

Yeah, so I will point out one troll who uses multiple sites and usernames to create fake news. If you are new and you see these you may not notice but if you start digging a little deeper I think you will.

A few years ago a piece of information about me surfaced that I was apparently selling fake diplomas online and people who bought my diplomas were going to jail in China???

Thanks so much for trashing my name and honest work, troll.

Where did you get this bit of info?

The only place I could think of where he would have came up with something like that was from this drawing I did a long time ago.

All of his sites and usernames have some things in common.

Lots of CHEESY photographs and usernames.

He's prolific, but why waste all your time writing up fake news and attacking people online???

Like this is what you are doing with your life?

Sites he owns or uses...

He has many SubReddits where he publishes his fake news

The guy write comments on his own threads on Reddit under fake usernames, his own subreddits and then upvotes his stuff.

One thing that you will notice is that all of these subreddits are restricted.

Does a restricted subReddit show he is a crook? Not necessarily, but when you have dozens of fake accounts and fake subreddit's it sure must be hard to keep track of them all.

And if you are trying to create an illusion why give anyone the chance of calling you out?

These are his subreddits.

And I am sure he has more.

Who runs these sites?

Here's a thought on that...

China Foreign Teachers Union and all associated sites are part of a fraud run by Bruce Gorcya. I don't know but it's very similar

Why is it every time I see the capital letters CFTU, my mind wants to convert it to STFU. Coincidence?!  I think not.

Though on that same page there are links to his sites and one of the commenters may have been him.

A moderator on scam.com confirmed this when he posted here...

I think there is too many to mention here I've seen them on Twitter too.

If you see a post about a SCAM or FRAUD (especially in China) then it's possible he wrote it.

Why am I writing this?

Because I know it's fake news. This guy said I was selling diplomas online. And yeah if you search my site with Google:

You won't find anywhere to buy a fake diploma.

So why would I do that?

He attacks other people makes stuff up all the while hiding behind his fake usernames.

Astroturfing is common in TEFL 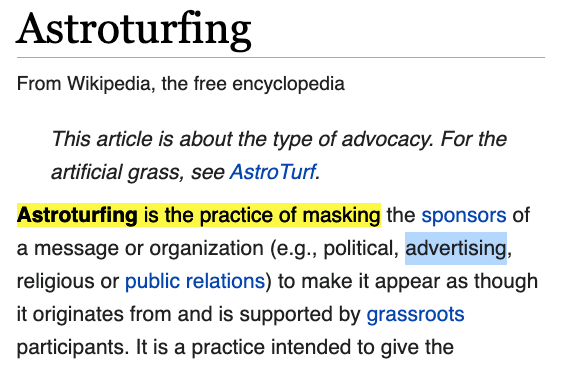 The guy mentioned above does it and so does one of them mentioned below who uses multiple fake id's, fake comments, etc. The guy who runs TEFL online pro and "Trusted" TEFL reviews does very similar stuff to the CFTU/China scam patrol guy above.

And this "deliberate attempt" can be both positive or negative.

And keep in mind "Trustpilot" was reported by BBC to have removed 2.2 million fake reviews. And BBC was also able to place fake reviews on their site despite their claims of not allowing fake reviews.

They are out there as I previously mentioned in this post on fake reviews. It could be fake or paid for or both. There are affiliate reviews where those people who write reviews are getting a cut if you buy the course they are recommending.

This video is about that too. It's quite possible to build an online reputation by buying it. See the video.

Fake reviews are fairly abundant. I stated elsewhere Amazon has over 200,000,000 fake reviews and on Yelp roughly 1 in 4 reviews is fake.

I know they are out there in TEFL course land. I know the site Trusted TEFL reviews and TEFL online pro is a scam and then fake reviews could be totally fabricated by the owner like previously mentioned or paid for.

Check out these videos by mytefl.

How genuine do these look to you?

They don't to me.

Most people don't write or make reviews. They don't.

what percentage of people write reviews

So what many company's do is give them an incentive for doing that by paying them or compensating them in some other way.

Fake or paid for video reviews

I would be sceptical any time you see "video reviews" uploaded to the company's channel.

See the video above "Inside the world of fake reviews by CBC marketplace".

Take a look. All these videos were uploaded to the myTEFL channel. If these are genuine video reviews why are they all on the company's channel? Are they totally fake? I don't know, but I would suspect that they were paid some way either with cash or with a "free" certificate.

Otherwise, why are all these video "reviews" on the company channel? 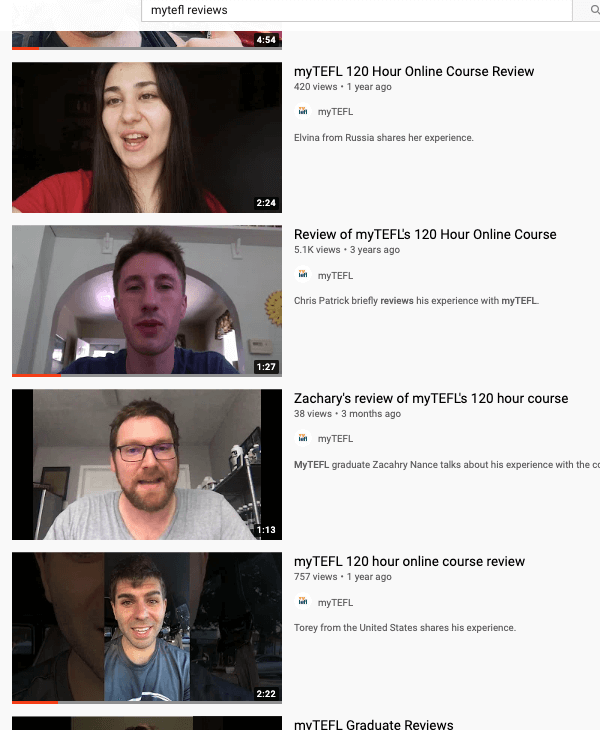 Why didn't these people upload these reviews to their own channels? 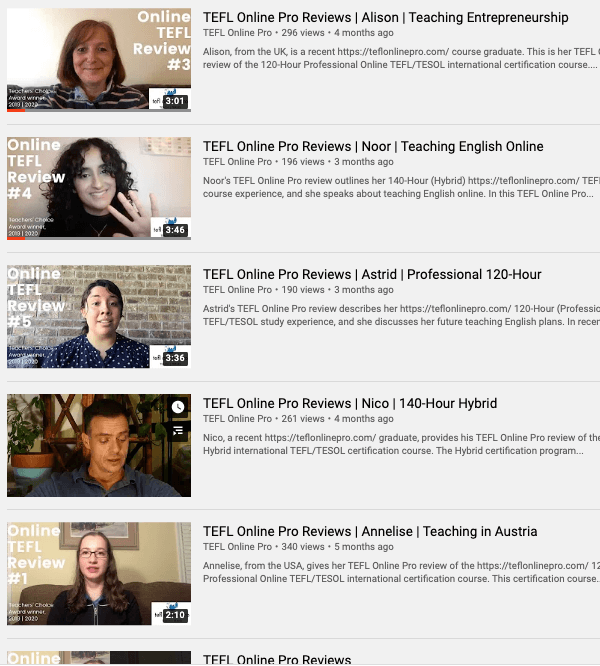 You might never think that someone would go in front of the camera and tell a lie. But if you pay them money or bait them with a free "certificate" they might. Check out all these web searches.

Type get paid to write reviews into Google and scroll down to the bottom and see what you find. These searches related to queries are based on what people are searching for. 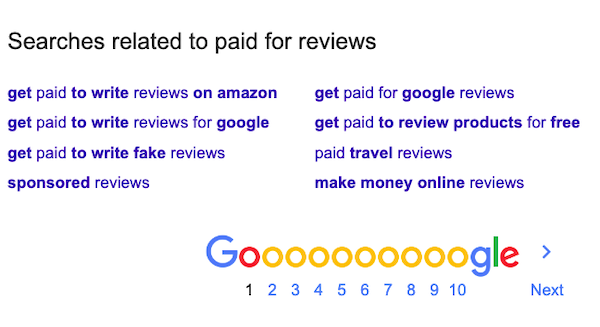 There are people out there that are willing to write fake reviews even if they get paid.

Do you want to read fake reviews when you are searching for info on a product?

So how can you spot these fake reviews and fake TEFL news?

Put your critical thinking glasses on. I found this interesting graphic from ifla.org that should help. 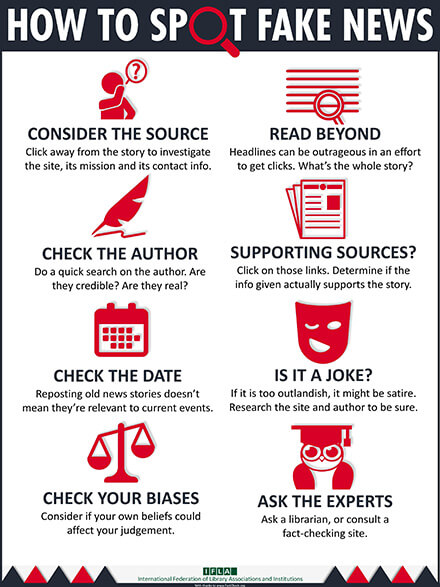 One key thing to know about Reddit was created by deceiving users. The originators of Reddit created many fake accounts to make it look more popular than it was.

If you haven't seen them on video or met them in person then how can you know who they are? And even if you have seen them in a video something you have to keep in mind is that there are fake video reviews out there and more on that later.

Check the source and check the author ID one more time.

The guy that writes the above stuff always links to his fake news on other sites so that it looks like someone else wrote it. If you start following those links then you'll start to see that things look similar.

The same people or company can create seemingly 3rd party sources like reviews or accreditations.

You got to dig deep to find the truth online.

Well, I gave you a few tips already.

The first one is who wrote this or who made this video or who runs this site?

If they don't give out any personal information or have any videos of them out there personally then I would probably take what they say with a grain of salt. For example, if you see above you won't find any videos of the "owner" of myTEFL or "trusted" TEFL reviews doing anything.

Do they have any personal channels out there of them?

It's all for show.

Well, actually the owner of myTEFL calls himself an intern for myTEFL (if you scroll down towards the bottom half you'll see a video screenshot of him).

They made it look like they are maybe "legit" on the surface to not-so-clever newcomers.

But why am I writing this?

First off I started my teaching abroad experience back in 2004. I saw BS being told then about TEFL/TESOL courses (the 1st course I took told me quite a bit of BS) and I wanted to tell the truth and separate the facts from the fiction.

I didn't actually create a TEFL course at first. I created a practical site to help teach people how to teach English with the use of visuals (videos) and a few years later I started working on courses.

Everyone of these people I've mentioned here has written slander and or lies about me. But they don't have the guts to actually reveal who they are. They just write trash and hide behind their fake or anonymous usernames.

For a while I turned my cheek, but then just decided I am not going to do that anymore.

Should I trust you?

You may have read slander about me or ESLinsider written by one of the above people. Some things they said (myTEFL) were why aren't there any reviews on ESLinsider on different sites?

Or Fake "Trusted" TEFL reviews said how did I get a bunch of answers to the question, "Is ESLinsider legit or a scam?" so fast.

1st the person that asked that question on Quora was the person who owns TEFL online pro and "Trusted" TEFL reviews. After I saw that and some of the answers I emailed people who took ESLinsider's course and asked if they would answer that question.

Anyone can leave a review on ESLinsider's course here.

But I say that if you don't use your email that you used in the course then I will remove them. Why? Because then you are most likely someone who didn't take a course with ESLinsider and out to damage my rep like the above people have tried.

If you have any questions about ESLinsider then you can send me an email.