China vs. Korea - Where should I teach English? 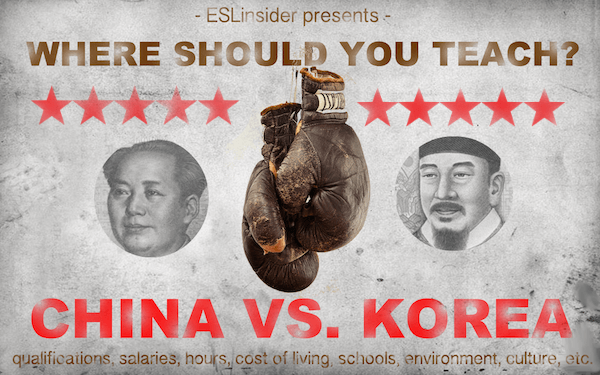 China vs. Korea? Wondering if you should teach English in China or in South Korea? This should help explain some of the differences between teaching in the two. There can be a lot of differences between schools though so sometimes it's hard to generalize about some things.

The qualifications to legally teach English in Korea are that you need to be a native English speaker and have university degree. There is one program where you can teach legally if you have completed 2 years of your degree. Although they can help TEFL certificates are not usually required or preferred.

In China the qualifications are similar yet there is a bit more flexibility. You may be able to get a job on an F visa (technically illegal for teaching) or possibly if you are not a native speaker. A Z visa is the legal visa for teaching English in China.

And for that they say you need either:

You can read more on teaching English without a degree if that is your situation. Korea is generally more strict than China when it comes to qualifications, but some people are saying that China has become stricter.

I think China tends to have a bit lighter work schedule across the board, but it does depend on the schools that you are comparing. In China if you teach English in a private school (training center) you will most likely be working on the weekends and you will have maybe one or two days off during the week. Most of your teaching hours will be on the weekends as that is the busiest time and you may just have a few hours a day during the week.

If you teach English in a public school or university then you will most likely have a M-F schedule.

In Korea most schools will have a Monday to Friday schedule. Even private schools (hagwons) usually have an after school schedule with classes in the late afternoon-night. Hours are commonly 2-9pm. If you teach in a public school with or without the EPIK program then you will work during the day from about 8:30-4:30.

What about salaries and cash?

It depends, but you'll likely make more money teaching in Korea. There are a lot of benefits such as free housing, severance pay, airline tickets, pension pay and a good salary (of around $2000 or more a month). The salaries in Korea are more standardized than the salaries in China.

In China many schools offer free housing, an airfare reimbursement, and a salary that can range from $500-2000 or so a month. Salaries can vary quite a bit in China and you'll make more in a big city.

The cost of living in China is generally cheaper than the cost of living in Korea. Food, rent and shopping tend to be cheaper, but it does depend on where you live and what you buy. If you are in a tier 1 city (Beijing, Shanghai, Shenzen, etc.) then your expenses will higher than in a smaller city. The same goes with Korea. Seoul is going to have a higher cost of living than say Jinju, Korea.

You are considered an assistant teacher at a public school in Korea. So you share work with another teacher. In China you are likely to have more responsibility and to be the lead teacher though you will have an assistant. In both places average class sizes tend to be about 30-45 students. You could also have larger classes upwards of 80 students or so (more likely in China). It's best to consult with the school in question.

My classes at a public school in Korea ranged from small after school (late afternoon) classes of 8 students or so and larger classes up to 40 students.

Public school teaching jobs in China do not seem to be abundant. The pay for these types of jobs is on the lower end as well (4500-7000RMB) and will likely include housing.

These are some of the highest paying jobs in China. These jobs can pay more than $2000 a month. To teach in one of these you usually need to be a licensed teacher and/or have experience.

These don't seem to be as common in Korea.

Getting a job in a university in Korea is usually more difficult. Teachers usually need a master's degree or a fair amount of experience. It tends to be easier to get into a university teaching job in China. Universities in both places tend to have a lighter work schedule with vacations. In China teachers make anywhere from 4500-9000RMB a month with free housing.

Private schools are called hagwons in Korea and training centers in China. In China teachers in private schools tend to make more money 8,000-15,000+RMB than in other schools in China. Teachers in kindergartens in China can do pretty good too. The only real differences I would say between these in Korea and China are in the work schedule and pay which are mentioned above.

There are of course individual differences between the schools.

Which has the better job market?

Public school job positions in middle and high schools in Korea have been cut which marks a shrinking market in the public school sector.

China is way bigger and it has a pretty diverse environment ranging from huge mountains in the west, deserts in the north, skyscrapers in the east and some nice beaches down in Hainan. The temperature can range from cold winters in the north to warm winters in the south.

Korea is pretty mountainous, but it is a lot smaller. You can travel by fast train from Seoul in the Northwest to Busan in the southwest in less than 3 hours. Snow is common throughout the country and the weather in the winter is pretty cold in most places. The most mild weather would be in Jeju.

China has a problem with population and pollution. Cities in China tend to be pretty polluted although I didn't think Shanghai was very polluted considering how big it was. Yet, by the time I got to Shanghai I had already lived in Taiwan and Korea.

Northeast China will be the most polluted place in China. Last I knew there were no factories in Shanghai which is why it is concsidered less polluted than some cities half of it's size.

Korea is not immune to pollution, but it is cleaner. I've seen a lot of people on Reddit complain about the pollution around Seoul.

Which language do you want to learn?

I recommend learning the language as it will make a difference and make you feel more connected. I lived in both places and was interested in Chinese, but not learning Korean. You'll have a better experience if you put forth some effort.

Mandarin is the most spoken language in the world. There are other dialects in China, but it is the main language. So in terms of numbers and places where you can speak Mandarin it's a more practical language to learn.

Korean is only going to help you in Korea which is a pretty small country, but if that's where you're living then that's good enough of a reason to learn. Many people find Korean to be easy to write and read.

Mandarin is spoken throughout China, Taiwan, Singapore and in Chinese communities across the globe.

Which is more international?

Most foreigners in Korea are teaching ESL or in the military.

But it really depends on the places you are comparing. A small city is going to have a more local feel vs. a city like Seoul or Shanghai.

Korea is generally a bit more modern across the board. The level of material comfort there is generally higher than in China. China is growing rapidly, but the wealth is not as evenly distributed as it is in Korea. In China you will see the rich alongside the poor. You will find people who live in rundown buildings and see people driving around in Ferrari's.

You can find different kinds of food in both places. Yet remember the larger cities are going to have more options. Smaller cities and more rural places will have less options.

The mega cities in China are going to be pretty westernized and there will be plenty of other foreigners there. Yet, if you are in a city of less than 500,000 (small in China) you might find it to be pretty isolating. The same goes for Korea. Smaller places can bring more culture shock.

Although some people can be crude I personally preferred the vibe in China to that of Korea. It's culture is more interesting for me.

Roughly 8 out of 10 jobs in China and Korea are for teaching English to children. Do you want to feel more confident in your abilities to teach children?

This course is focused on teaching English to mostly kids in Asia.

Do you want to have a better experience teaching English in Asia?

Check out these teaching resources and courses.

Teach English in Asia Guide You just discovered an informative and insightful path to teaching in 4 Asian countries.

Get the latest posts delivered to your inbox or follow me on Twitter (I tend to be more consistent about posting blog posts there).