There's a lot of great places for beaches in Asia. Places like the Philippines, Indonesia and Malaysia have fantastic beaches, however there is no market for English teachers there. Even if you could find a job there you would be making very little money. If you want to teach English abroad you'll find that jobs are relatively plentiful in Thailand, Vietnam, Taiwan, China, Korea and Japan.

TEFL jobs in Eastern Asia: Korea, Japan, Taiwan and some in China tend to be the highest paying ones in Asia. At the end of this article you will find some more info about the job situation, but for now let's check out some of these great places.

Thailand is noted for it's great landscape, weather, beaches and great food. Compared to some of the other countries in Asia you will find it to be pretty laid-back. Generally the farther south you go the better the beaches will get. This is a premier vacation spot for tourists from all over the world. 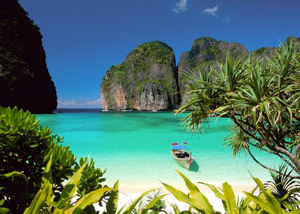 This island in the south of Thailand is pretty touristy, but it's still beautiful and finding a job here is possible. Since it's also a hot tourist spot you won't experience much culture shock in a place like this since there will be plenty of foreigners around and amenities catering to them. There are also loads of great beaches nearby. Of the two listed here in Thailand this one will have the most jobs.

Phang Nga is close to Phuket and Krabi. This region is noted for it's limestone karsts. Living in this area will be more of a cultural experience since it is less populated.

You can look at this resource to find more information and a job in Thailand.

Vietnam has over 3,000 Kilometers (2000 miles) of coast line. You'll find plenty of beaches here and it has a decent scene for teaching English. The government is pushing English learning and you will find most jobs in Hanoi and in Saigon. This is pretty similar to other countries being that most jobs aren't next to the beach. As far as money goes... it's often better than Thailand and better than much of China (there is a wide range of salaries for teachers in China).

As far as finding some really nice beaches and the opportunity to teach English I would say that this is the best or second best place in Asia. It's going to be one of the most tropical. 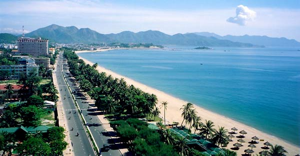 Nha Trang is a city in Khanh Hoa province that is around 500,000 people. It's a popular spot for beaches in Vietnam. It's also a decent sized city, so you will find a fair amount of options (cafe's, restaurants, nightlife, etc.) and some jobs here.

This small city on the ocean is only a 3 hour drive from Saigon. You'll find some great beaches and sand dunes here. And you can take a look around to find a job here and online. Here's a summer camp job and a university job.

Taiwan is a densely populated island off the coast of China. Aside from the populated west coast it's a beautiful place. Taiwan's east coast and the very south of the island are the places to be for great beaches and natural beauty. It's also where you will find the best surf.

Read more about the best beach places in Taiwan.

Japan is a popular place to teach English, yet it is a bit more competitive than the other countries. It's also more expensive, so if you are going to go there to look for work bring plenty of money to start up with. Most of the nice beach locations - at least warmer ones, will be in Kyushu and on the Okinawa islands.

This is as far south as you can go in Japan. It consists of over 100 islands. The US military has a base on Naha. Winters can be in the 60's here. Finding a job here wouldn't be that easy. Again you would fair better to be here to find a job, yet you could try making a request with the JET program. 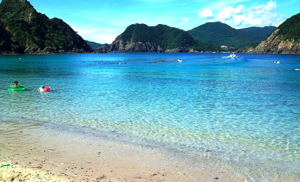 This is the largest city in the very south of Kyushu prefecture. It's around a half of a million people. Just across the bay is Sakurajima - one of the worlds most active volcanoes. You will find some great beaches here as well as hot springs. You can try requesting it with the JET program or just come and look. Here's a list of links to sites in Kagoshima.

Xiamen is a nice city in the southeast of China. It's not to far from Taiwan and it's noted as being one of the cleanest cities in China. It's a around a million people and it's right on the ocean. You'll find some beaches around the city and the nicest one on Gulangyu island. Gulangyu island has a nice vibe and scenery.

It's beaches won't compare to Thailand, Vietnam or Taiwan's east coast, but it's a nice place and it's a bit larger, so finding a job shouldn't be too difficult here. You can also check out the interviews with several ESL teachers in Xiamen. 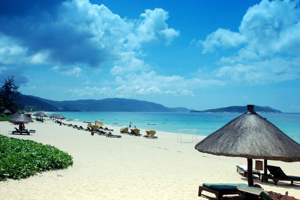 This is as tropical and far south as you're going to get in China. It's also one of the cleaner (air) locations in China. Haikou is the largest city on the island. Sanya is the southernmost city on Hainan and this would be closest to where the best beaches are in China, such as Yalong Bay.

Korea is pretty far north, so your access to the beach may be just seasonal. But it still has some decent spots. It's a popular place to teach English in since the money situation there is pretty good for teachers. Summers are pretty hot, humid and winters can be cold. South Korea is on a peninsula, so there are indeed a number of beach areas. Yet you probably won't be getting a tan in the middle of December.

This would be the best beach location in Korea. It's also the warmest place in South Korea. A good place to find a job on Jeju is at Dave's ESL Cafe. Keep in mind that schools here tend to pay at least 200,000 Won less a month compared to what you would earn on the mainland. It's possible to find a job here from your home country.

The largest cities on Jeju Island are Jeju City and Seogwipo. Seogwipo is the warmer of the two in the south of the island.

Not the best, but here are a few other good locations

Busan, Qingdao and Koahsiung are a few other places you might want to consider. These are large cities on the ocean that are fairly nice, but not amazing. Since they are larger you may find a job here easier. The weather in Qingdao and in Busan is temperate and there are four seasons. Koahsiung is mostly hot to warm year round and Kenting is 3 hours away.

You could also be a weekend warrior and get a job in a big city like: Saigon, Hanoi, Taipei, Bangkok, Guangzhou, etc. But those places aren't that close to the beach and that's a different lifestyle. So the places mentioned above are nice and well mostly fair to small sized cities near or on the beach.

Jobs in some of the sweet places above will have a higher demand and there can be fewer opportunities. It doesn't mean you can't get a job there it just means that it will not be as easy as finding a job in many of the larger cities or less desirable places in those countries.

What often comes with finding a job in a better place?

Chances are it's not going to be easy. But what's easy? If you really want something you have to work for it. That means you would do much better going door to door than getting online. You should search online too, but don't be discouraged if you don't find much. Finding a job in one of these locations will be a reward in itself.

Jobs teaching English are plentiful in most of Asia. However, they are not in countries with great beaches like Malaysia, Indonesia and the Philippines. Why not? Well, first in these countries English is already the second language and most people in these countries can already speak some English. Secondly the economy in these countries is not good, so even if you could find a job here you would be making very little money.

The larger the population of a city/area the more teaching jobs there will be. You need to be in a place where there are locals and not mostly tourists. Tourists will not be there to learn English. So while there may be gorgeous beaches in Koh Phi Phi and plenty of tourists you are unlikely to find a job teaching English there.

Why you should get a TEFL job by the beach

Living by the beach has many positives like: a more relaxing lifestyle, an uplifting environment, barefoot walking and better air. While living in a big city can be exciting, pollution and smog can be a big downer and it's not good for you. Most people will take the secure and easier route when finding a job. But here is a key note: even though jobs in more remote areas are more coveted, fewer people actually have the guts to actually go there and look for a job. They'll just look online. So do a little research, prepare yourself, improve your qualifications and go for it!