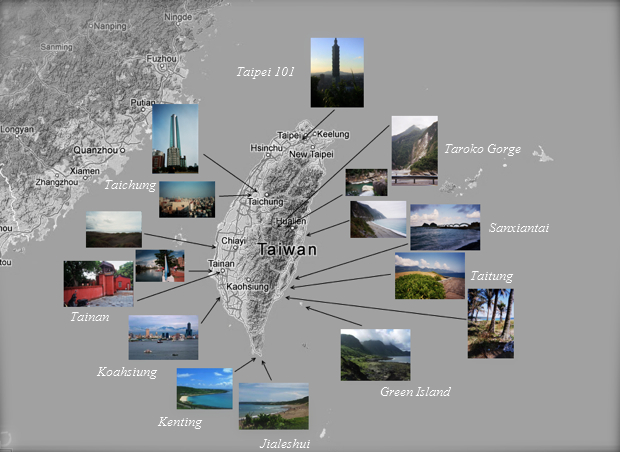 Taiwan is also known as Formosa. This name was given to Taiwan from the Portuguese and it means "beautiful island". Taiwan lies on the tropic of cancer. The tropic of cancer runs through Chiayi. To the west of Taiwan lies China and the Taiwan strait which is less attractive compared to the east of Taiwan and the Pacific ocean. It takes roughly 6 hours to drive from top to bottom.

The western third of the island is plains and this is where the majority of the population lives. The island has a mountainous interior and many mountains are over 3000 meters. The tallest mountain is Yushan, which is nearly 4000 meters (12,966 feet). The east coast of Taiwan is quite beautiful.

The official language of Taiwan is Mandarin Chinese. The majority of the population will speak Chinese. Taiwanese is also spoken. It is more commonly spoken in the south of the island and amongst the older population.

Taiwan suffers from pollution, which is mainly generated by scooters and industrial areas. Factories are less common than they used to be as many of the factories have moved to China. The country has also cleaned up considerably since the 70's and 80's.

Another contributor to the pollution is the dense population. Roughly 23 million people live in Taiwan.

The weather in Taiwan is generally hot and humid. The hottest that it may get is around 37 degrees celsius. The coldest that it usually gets is around 11 degrees celsius in the winter. However, it can snow within the mountainous interior. The north of Taiwan tends to be rainier and slightly cooler than the south and western portions of the island.

Typhoon season around summertime tends to bring heavy rains and winds to the island. The east coast can get hit pretty hard from the typhoons. Typhoons can shut down schools and it's best to stay inside during one.

Taiwan lies near the Pacific Ring of Fire. It is in a seismically active zone. I experienced several small earthquakes while there, but there have been big ones such as the "9-21" earthquake where several thousand people died.

Most ESL teachers work in "cram schools" or buxibans and others in the public school system. Teachers tend to make pretty good money and the cost of living is pretty low too.

Many of these facts are taken from the CIA's website.