Pollution in Asia - Where's the trash can?

Pollution in Asia is partially a result of a lack of awareness and it being overcrowded. Unless you find yourself in Japan or in Singapore it will be something you will encounter in one form or another. It might come in the form of exhaust from cars, scooters, litter, or factory waste.

I think things are improving on many levels yet, the laws are lax and many people are ignorant about the problems that exist from the rampant urbanization.

Taiwan is shaped like a sweet potato and most of its dense population lives on the western third. The center and east coast of Taiwan is beautiful and sparsely populated. Taiwan used to be a big producer of plastics and other cheap junk, yet much lesser now as many Taiwanese factories have moved to China.

I remember going to the beach in Tainan after a typhoon and I was disgusted by how much junk and trash had washed up on the beach. Some of that could be from China too.

So there aren't as many factories, but...

The big problem in Taiwan is pollution from scooters

There are millions of scooters there and many are 2 stroke engines which contribute even more to pollution than a four stroke engine. On top of that some are old and spitting out visible exhaust and there aren't any strict laws to stop them.

23 million people live in Taiwan and anywhere from over 40% to 70% (depending on the city) are using scooters. That's more than 10 million scooters in Taiwan.

"In Taiwan, pollution from scooter exhaust is a public health concern. Studies have found correlations between higher measurements of the fine particulate matter classified as PM2.5 in the air and increased cases of chronic obstructive pulmonary disease in local hospitals."

Here's an article about how Taiwan's air is worse than Hong Kong's, Singapore's, South Korea's and even worse than some cities in China.

Are scooters/motorcycles worse than cars?

Taipei hopes to ban 2 stroke engines in the future.

Here's an article about how Taipei is hoping to ban 2-stroke scooters on public roads by 2019.

Taipei is the most strict out of all the Taiwanese cities as far as enforcing laws goes. So you could expect the rest of the cities to be behind.

Lastly see for yourself. It doesn't always look like this, but do an image search for smog in Taiwan.

Things are said to be improving...

And I think the Chinese government, you’ve actually seen pollution levels come down pretty dramatically in the last few years. China’s already making progress on this problem and I think should be commended for that. - Marshall Burke

China still has a big problem with pollution. There are lot of factories and coal there. I lived in Shanghai and it's considered one of the cleaner cities to live in considering that it's nearly 20 million people. It's still cleaner than many cities less than half its size. People don't ride motorized scooters so much, here you will find these rather silent electric bikes. There are also electric buses and a few windmills along the Huangpu river.

Some people will just toss their trash into the streets and just keep walking. I also saw this phenomenon in Taiwan and Korea. The streets can be pretty littered with trash by the end of the day, but thankfully the clean up crew still shows up with their bamboo brooms and wagons. 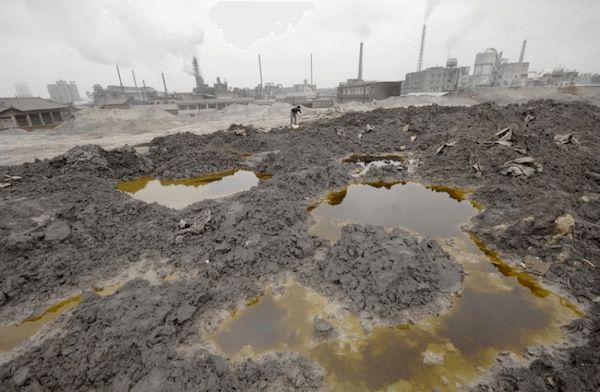 It's spreading southwards to rainforests in Malaysia. It's also spreading to the east across the Pacific ocean to California. This study suggests that 29% of San Francisco's pollution is from China. And before it gets as far as the US it sometimes sets foot in Korea and Japan in the form of yellow dust which is a mix of dust from Mongolian deserts and pollution from China.

The most polluted cities in China

The most polluted cities in China in terms of air pollution mostly lie in Hebei province. Chances are you never heard of them. The most popular of the top 10 was Xi'an (terracotta warriors). Beijing was number 13 on the list. And Shanghai was number 48.

The least polluted cities in China

The least polluted cities in China in terms of air pollution according to this study were as follows.

Even though China is pretty polluted its cities don't compare to those in India.

I didn't think Korea was so bad. One of the first things I noticed was that it was comparatively cleaner than Taiwan. Living in Busan I never noticed the yellow dust like in Seoul. The problem I had was finding a trash can. They just don't place them on the streets not at least where I lived in Busan (Korea's 2nd largest city) and Changwon. 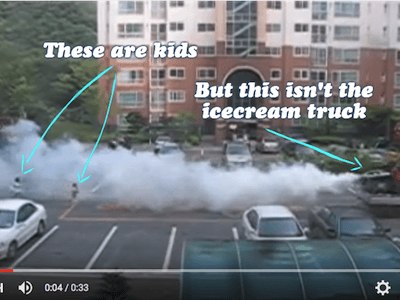 In Changwon there was a morning when I could smell someone burning trash. Then there were the mosquito spray trucks which came around in the summer. They smelled pretty toxic and whatever pesticide that they were spraying - DDT or whatever just goes back into the water supply.

But other than that it is known for being environmentally friendly. Here you'll see a lot of houses with solar panels and they have a cool public bike system called Nubija where you can use its bike system for 20,000 Won ($15-20) a year.

Japan is the cleanest of the four. People are much more environmentally aware here and there is more order. The streets are generally clean and the public bus drivers turn off their buses at red lights to conserve resources.

Much of Japan's improvements with the environment were due to its problems in the 50's and 60's. Despite its improvements it does still burn waste, but then again is burning waste worse than putting it in a landfill?

Yet, like Korea it does suffer from air pollution from China. There are some stinky buses though. Sometimes I see some pollution in the canals - garbage and stuff here in Fukuoka, but the water can't be that bad as I see fish, ducks, wilds birds and turtles playing around in the water.

Which is cleaner - China, Taiwan, Korea or Japan?

A lot depends on the actual place that you are in as things can vary a bit from city to city. But the most environmentally friendly and least polluted places mentioned here are in this order:

Another form of pollution in these places is noise pollution.

What effects will air pollution have on your life?

Well, in the short term you may feel like your eyes and/or throat is burning. You may find yourself coughing more. In the below video some children developed lung problems including cancer before they were 18 years old.

In fact you could develop:

If you live within 50 meters of a major road, your chances of dementia go up by 7 percent.

Some airborne particles from cars are so small that they can go directly from your nose to your brain.

...Those changes are called epigenetics. It was really just the days of air pollution that led to certain epigenetic changes. Not only that, but we were able to show, when the individuals came back on a later date, that those epigenetic changes had disappeared.

These are transient or temporary changes, which is good news, because it means that if we can limit exposures, that they are more likely to not be permanent. It also begs the question of, if we don't limit exposures-- if you're living, for example, in a place where high levels of air pollution are more common and permanent-- you could be in more trouble for those epigenetic changes becoming longstanding.

Are there any solutions?