The term "Culture shock" suggests that it's something that happens quickly, however that isn't always the case. It can be more of a process and something that takes time to develop. You might not notice any shock as I didn't.

Because at first you are more likely to be excited about being in a new place.

Over time though things can get to you as life becomes more routine.

Here's a list of cultural difficulties I and many others experienced while living/teaching English in Asia (China, Korea, Japan and Taiwan). 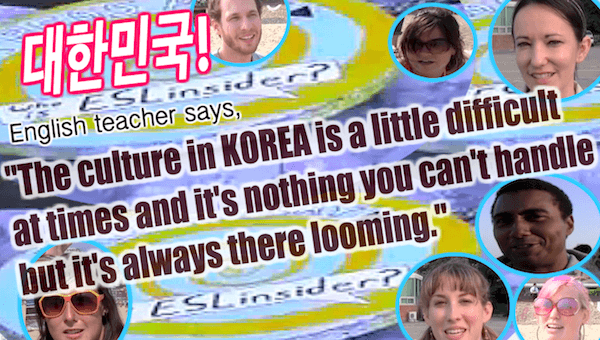 This quote above was from this video about teaching in Korea.

Language is going to be one of your biggest problems.

Without a knowledge of the local language you'll be in for some difficulties and frustrations at some point. Consider learning the language. You don't need to know the language to teach, but it will make your life outside the classroom better.

Food is different and you won't have the selection that you are used to. Some people struggle with it and even if you think you like the native food from the country you're going to, it's going to be different from what you are used to. A number of teachers in the interviews commented on this.

Vegetarians can have a difficult time too. I thought Taiwan was pretty good though for veggie food.

If you aren't very flexible with food you might want to reconsider teaching abroad or choose the largest city for the most options, but remember it still won't be like home.

No, you're probably not weird, but to many of them you are. East Asia is a pretty homogenous place.

Roles are in most cases are now reversed. You'll get to experience what it is like to be a minority. Many people have no problem gawking at foreigners. Staring is commonplace.

On the other hand if you are Asian then you might fit in and people might assume you are a local.

Why sure, go right ahead...

Someone asked me that at least once.

Kids will want to touch your arm hair, head hair and maybe even your nose. I've had adults ask me that.

This is like the third language. It's not your native language and it doesn't seem to be theirs or is it?

Expect indirect communication at times and be able to read between the lines.

The concept of "saving face" can be confusing. Being agreeable and polite is the way and being honest and direct is not. This can vary a bit across Asia, but I'd say Japan is the most polite, but this can come across at times as being "two-faced".

"They'll tell you everything to make you feel like this is the way they feel, but in the back of their mind they do not feel that way. It's rather annoying coming from a place that is extremely straight to the point. It feels like you always have to go around your butt hole to get to your you know..." - Jay and MD in Japan

Different cultures have different concepts of personal space. Chances are yours is bigger than theirs...

Peoples manners are different. Sometimes they will seem better, more refined (often in Japan) and other times similar to rednecks. For example, in China some people can be rather curt and you won't hear so many "thank you's".

In China you're likely to at one time or another to be the recipient of pushing or someone cutting in front of you or someone else in line. Some of the older folks in Korea also seem to enjoy pushing.

There's this sense of heirarchy in Korea where the older folks sort of abuse their seniority at times.

This is not common in Japan. Most people are very courteous.

In Asia smoking in public is more acceptable than in the west. While it's not allowed in all public places the laws are certainly more relaxed. People will light up in some of the local restaurants. I remember this in China, Korea, and Japan.

And in some places throw the butt on the floor (in China).

In Korea they love to smoke in the bathroom. 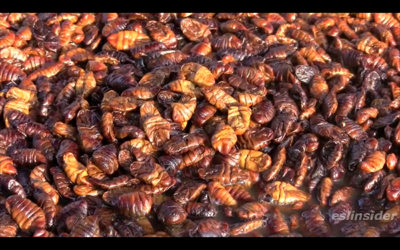 Spitting is common in China, Korea and somewhat in Taiwan.

In Taiwan (outside of Taipei) you'll find red betel nut stains on the streets. In Korea and China it's quite common to see people spitting in public.

This is not common in Japan.

Hawking (clearing your throat) is common in Korea and China. It's like there's a competition to see who can hawk the loudest.

People, which are often kids and older folks seem more comfortable farting in public. Older folks walking by seem to have no problem letting one rip as they walk by you on the street. Kids in the classroom also seem to be immune to the foul aroma someone left in the room.

Nobody will say anything.

Perhaps it's more acceptable.  I don't know, but I've experienced these things in China and Korea.

Things that make your throat and lungs hurt

Larger populations bring more pollution. In some places you'll find trash in the streets and sometimes on the restaurant floor (China). In Korea you'll find it difficult to even find a public waste basket on the street.

12. Too many cars and too many scooters

More cars, scooters and motorcycles equals more exhaust and pollution. If you are in a bad area or it's a bad day it's a good idea to wear a mask. Taiwan is especially bad for scooter pollution as is much of Southeast Asia. Scooters are not very common in Korea or Japan and China is getting hip and there are quite a few electric scooters now.

I found Japan to have the cleanest air and general environment, yet some of the buses can be pretty stinky.

Industrialized nations have more factories, often less regulations and create more air pollution. Taiwan used to have many factories, but now most of them have moved to China. Northeast China is the most polluted part of China.

Northeast Asia also suffers from "yellow dust" which is wind blown dust from Mongolia and Northern China mixed with air pollution. For example, cities like Seoul have poor air quality partly due to this seasonal yellow dust.

Things that make your ears hurt

Sometimes it seems like anybody has one, from the fruit guy on the street to the baker in the supermarket. I found this to be pretty common in Taiwan, China and Korea.

Come the season they hit the streets with vans and loudspeakers. I remember these in Taiwan.

Some stores on the street will play really loud music. It's as if they think the louder they play the music the more customers they are going to get.

I remember this in China and Korea.

Asia is not so politically correct and discrimination is practiced openly. I suppose the very act of requesting a photo with your resume is an act of discrimination, but 99% of the schools and recruiters in Asia will do that.

Expect things to be challenging and different.

Being open to new experiences is possibly the greatest asset one can have for a fulfilling time abroad. Japan is the more sophisticated, well mannered place out of these four, but it's still different and don't expect any of these places to be like home.