If you're thinking of teaching English in Asia then you have probably heard of racism in Korea, Japan, China, and Taiwan. The first thing that you should know is that Northeast Asia is largely homogenous.

Take Japan for example, the Japanese make up roughly 98% of the population. That only leaves about 2% for the non-Japanese. And that is made up of mostly other Asians and some non-Asians.

In the sign above you might notice that it is also written in Korea and Chinese under the English which I guess suggests if you are Korean or Chinese stay the $#@! out!

Here's one posted in China. 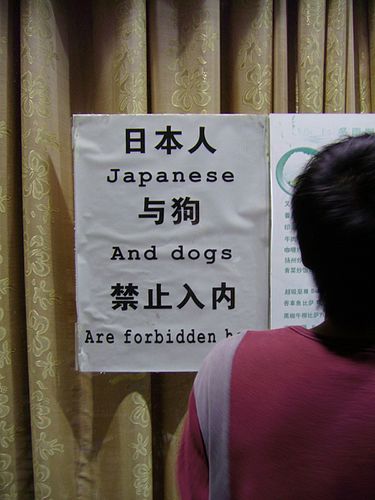 There's discrimination because you look different

In a place like this, if you're not from or of Northeast Asian descent you'll stand out. You'll be a kind of novelty and that is part of the cultural experience. Which can be nice as many people may be more interested in you and at the same time some may be afraid of you.

If you sit down next to them on the train they might get up and move or if you walk by them they might scowl in fear or take a wide berth around you.

It's all because of the fact that you're different from them or rather you're skin color and genetics are different.

Or you may encounter job ads that say they are looking for a "Caucasian teacher". These are sometimes openly advertised and other times not. ESL employer preferences can be discriminatory.

"I am black and I have an Afro. Think about it. Yeah they do give you a second look and sometimes it does make a big difference. At the same time they do sometimes, because of the differences, just want to know the other side of the tale.

- An interview with MD in Japan

In Northeast Asia white skin or rather light skin color is considered beautiful and of higher class. Many Chinese, Korean and Japanese women spend money on skin lightening products. Dark skin is thought of as being lower in class.

This is partly because people with dark skin have to work out in the sun and do manual labor. Southeast Asians face discrimination and their skin is only a little darker. You'll sometimes see some of them working in the service industry on the bottom rung.

Basically if you are not of the Eastern Asian majority you are a minority and you will be subject to racism/discrimination. But it is not always how you think. Sometimes you might get some special treatment just because of how you look.

People might want you to be their token "foreign friend". They may want to be your friend just to learn English too. If you are Asian American for example, you may have some difficulty too with being accepted.

"Teaching here, discrimination I guess. Cause I don't look white enough. The first time that I applied for jobs here I was obviously turned away because they didn't think I could speak English.

But this school that I am working with now gave me a demo class. They gave me a chance. I started teaching part time and slowly became a full time teacher. Now I am the head teacher."

I found this question on Quora and I thought it had some good answers. This guy has a couple of strikes against him.

The first one is the fact that he is not from a native English speaking country. You usually need to be from the USA, Canada, New Zealand, Australia, South Africa or the UK to get a legal teaching Z visa in China. You can sometimes find work though if you are not. You can learn more about teaching English as a non-native speaker.

As you have already learned being black or having darker skin is less desirable in some people's eyes. So if you are not a native speaker and you are not Caucasian then you have a couple of strikes against you. It's not impossible, but you'll have fewer options.

So do white people suffer from racism in Asia too?

In my more recent experience living in Japan I think I got quite a few screw faces from females.There definitely is some fear and xenophobia.

Many schools prefer white teachers to teachers of other ethnicities. Yet being white doesn't necessarily make you immune to discrimination either. I have lived and/or traveled throughout all of these places. And there were times when I'd be looking for help or perhaps I tried to make some communication and I was straight up ignored or given the cold shoulder.

And in some cases I could speak the language well enough, but some people couldn't get past the image that was looking at them.

I interviewed around thirty or more ESL teachers in Asia and about four of those were not Caucasian. Asian Americans for example, can also receive some degree of prejudice as noted above. In their case it can't be racism since they may be of the same race, but they are from a different culture, they are an outsider.

So while racism can exist so does xenophobia. As a foreigner in Asia you are different and you are an outsider.  That may never change in many of their eyes any time soon.

I personally never understood the distinction of "Black" and "White". As a so called "White" person my skin color is not really white, but beige like. And a "Black" person doesn't really have black skin, yet brown. You can read more on racism in Asia on Wikipedia.

Learn more about teaching in Korea, Taiwan, Japan, or China.