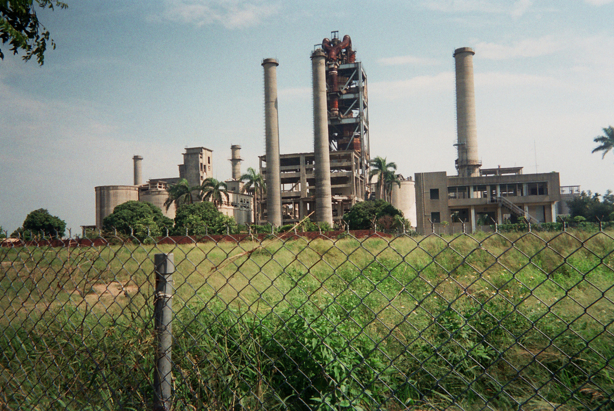 I used to drive by this old factory everyday on my scooter. Then I lived in Tainan and commuted to Alian where my buxiban was in Koahsiung county. I really liked this place. I don't know why, there was just something about it. Sometimes I would imagine renovating one of those buildings and living in it. There were other old factories that were no longer running around Koahsiung city. Those were cool too.

I wondered how long it had been since it was last running. To some folks it probably looks drab and it is definitely not the Acropolis, but it's kind of beautiful in its own way. It's an Acropolis from a different time and of a different sort. If it was still running and pumping out pollution then I probably wouldn't think it was so beautiful. Maybe part of the beauty has to do with the decay. I also really like old warehouses and cement structures.

It's kind of inspiring to see the remnants of this man made structure surrounded by the trees and palms. Life is going onwards. I would just stop on my ride to work sometimes and just look at it. My scooter ride was about 40 minutes from Tainan to "Happy House" the buxiban where I worked in Alian, Taiwan. I also got to see plenty of "La mei" or rather the "Betel Nut Babes" along that drive.

Occasionally I would go slightly out of my way to a beach nearby and swim in the ocean after work. Then I'd hop back on my scooter and head back to Tainan. There are fewer factories in Taiwan now then there used to be. The islands cleaned up a bit and many of the Taiwanese factories have moved to China.

I took this photo when I was teaching English in Taiwan.