Will you work in a buxiban, hagwon, eikaiwa or training center? Learn more about them here

What is a hagwon, buxiban, eikaiwa or training center? Private language schools, academies or institutes are referred to as buxibans in Taiwan, eikaiwa in Japan, training centers in China and hagwons in Korea. They can also be called cram schools. These schools typically run as after school programs. 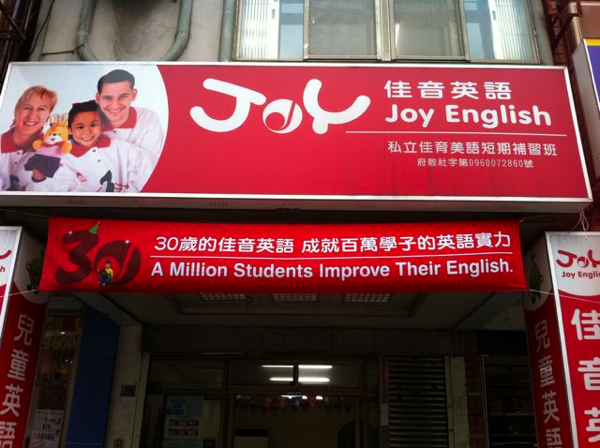 Students typically attend these academies after normal public school hours. Some can be small mom and pop operations and others can be quite large franchises spread across multiple countries and/or cities.

The majority of private schools in Eastern Asia tend to focus on younger students aged from about 6-13. So you might want to take a course focused on teaching that age group like this one.

However, teaching adults is also a possibility.

Below I will mention some school names, but I am not necessarily recommending them.

Teaching in one of these kinds of schools can be difficult so make sure you see Sendai Ben's quote towards the end of this page (regardless if you teach in Korea, China, Taiwan or Japan).

These private academies are businesses

Hagwons, training centers, buxibans and eikaiwa (and more on those in a bit) are all businesses. They are not only for learning English language but they also exist for math, music, art, and various other subjects. Unlike public schools they will vary more across the board as far as their curriculum, materials, student age, teaching methods, etc. goes.

People can have different experiences in hagwons, buxibans, training centers, etc. Don't assume they are all the same. I frequently see people saw for example, "Hagwons are horrible", "Stay away", but the truth often is that was their experience and the school they chose. And most often it's one school they worked in.

They're called "hagwons" in South Korea

I had one contracted job with a hagwon and another with a public school. Aside from that I did work in a number of different hagwons and kindergartens as a short term teacher or a substitute teacher.

I worked in a hagwon called "Wilshire" language school which is a small chain in Korea. I taught from about 3-9 or sometimes 3-8, however I would come in about maybe 15-20 minutes earlier to prepare. At this point I had already spent 2 years in Taiwan so planning didn't take much time. I would usually look at the book to get an idea of what to do and then go.

One manager there was a total $#@!*&^. Of course he didn't like that I would come in late, but he was this hardcore Christian freak.

I really didn't like that guy and then later another scary woman replaced him.

I would teach 5 or 6 50 minute classes a week M-F. I taught a mix of elementary students and middle school students, but probably more elementary which I like better. Middle school kids in Korea often seemed so sullen and quiet and reluctant to speak. It's like their souls have been crushed by this oppressive academic force.

Although when I first started in Taiwan I didn't like them either.

I started off making a salary of 2.3 million Won a month and then went up to 2.4 and then if I signed again she said she would have paid 2.5, but after a year I called it quits. My boss there was fine and I liked her. The managers definitely not and some of the co-teachers I could have lived without.

But in a hagwon you don't usually work together with the co-teachers unlike in a public school.

Then I worked in a number of kindergartens from like 9-6 or so. I kind of liked those jobs which are a mix of elementary and kindergarten. Although they aren't easy going as they are long hours.

My popular video on Youtube called, "Teaching Kids In 5 Fun Steps" was filmed in one of those.

I did a year in a hagwon and like a year of traveling around Asia a bit and working short term jobs in Korea until I got a job in a public school.

Here's some more info on hagwons vs. public school in Korea.

Here are some "chain" hagwons big and small:

Again I am not recommending any of them here or below. I personally prefer smaller mom and pop owned hagwons or academies than I do the larger chains.

This is inside a kindergarten classroom in Korea.

In China they are often called "training centers"

In China, a teacher may work as many as 40 hours a week, such as at a large franchise like English First. They may teach around 20 hours or so a week and the remaining hours will be office hours.

However, teachers at DD Dragon or at Shane English Schools may work six days a week, but only teach around 16-25 hours. And they might not have any office hours except for a few.

Teachers at some training centers may only have a couple of classes a day during the weekdays. The weekends will be the busiest times and on these days teachers will have more hours.

At some training centers teachers may have to do some marketing activities. These activities could include passing out flyers on the street or doing demonstration classes in front of prospective student's parents.

I briefly worked in a small training center in Shanghai in 2011. It was very small and I don't think it was part of any franchise and I can't even remember the name. I think I made around 11-12,000 RMB.

I didn't work many hours.

It might have been around 20 hours or so total.

Often in a training center in China you will work Saturdays as weekends are the busy time.

In China some training centers are called:

In Taiwan they are called "buxibans"

Most teachers in Taiwan work around 25 hours a week (full time) in a buxiban. Some employers can give foreign teachers a work visa and ARC for working as little as 12 hours.

Like other private schools teachers usually work in the evenings. Many may require you to work on Saturday as well. It is considered illegal to work in most kindergartens, however some teachers still do.

Employers usually require a teaching demo when interviewing for a job. This is also common in China.

I worked in a number of schools in Taiwan that included many different buxibans and kindergartens (early mornings). I also worked as a substitute teacher in a public school, but I had 2 main jobs in buxibans where I was contracted.

My first job was in Taichung at a franchise called "Gau jie" when I started in 2004. I worked about 12-14 hours a week in the evenings usually and occasionally Saturday morning. I taught mostly elementary kids.

That was my first job teaching English to kids and it was difficult. Their books were also not so good. They were quite boring and had grammatical errors in them which can happen if the publisher is from a non-native speaking country.

And I was a pretty poor teacher then.

When I first started there I would come in maybe and hour and a half early to prepare.

I worked there for a year and then I moved to Tainan.

There I worked in a small buxiban called "Happy House" from about 3-8pm that was owned by a woman. It was small and I liked that better. The owner also trained me a bit, so I improved as a teacher a bit.

I worked about 18 hours a week teaching mostly elementary kids.

Some buxibans in Taiwan are:

This video was filmed inside a buxiban in Koahsiung, Taiwan where I worked briefly as a substitute teacher.

In Japan they are called "eikaiwa" 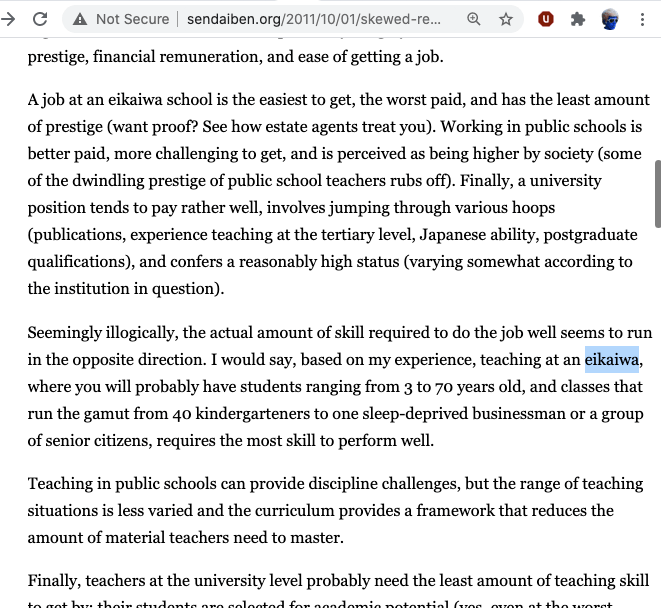 Learn more about teaching in Japan.

Teaching in a private academy can be hard.

I taught taught in China, Korea, Taiwan and currently live in Japan and I would say that all those places are pretty similar to what Sendai Ben said above.

I have been teaching for about 6 months now in Taiwan and I've been wondering how I can keep doing this. I'm just tired of going back every day and dealing with the same students with the same problems each and every time. All April and May my school drove my ass into the ground with promotions and demos and work events, to get as many students as possible, without regard to their current students.

It just seems like a money making scheme, and the quality of the service is secondary to getting as many students as possible. I know cram schools are businesses and I don't want be intentionally naive. I guess I'm worn out and I'm starting to feel depressed.

Is this the way it is and all schools in Taiwan are like this? How can I get through more of this? - Reddit

Here are some frequently asked questions about teaching in hagwons, buxibans, eikaiwa and training centers.

How many students will you teach?

It depends on the school and class. I've taught classes in private schools ranging from 1 student to about 20 or so for the largest class. This is one advantage to working in a private academy.

In a public school you are most likely going to have much bigger classes with often 30 or more students.

How old are the students?

It depends on the school. They can range anywhere from pre-school aged to adults. The largest part of the job market is for teaching children.

When do you get paid?

Based on my experience most schools will pay you on or around the 10-15th of the month. So they will always keep 1-2 weeks of pay unlike my public school experience where I got paid at the end of the month.

What kind of books do you use?

It depends on the school. It's a good question to ask when you interview.

Some teachers do have bad experiences working in private schools. You may have read that someone's school went under and they weren't paid. Those things can happen, however in terms of probability it is not very likely to happen.

Don't assume any one brand name of private academies is better than another. Instead focus on the specific branch and personally I tend to stay away from the really big ones.

Dealing with schools one on one and with direct communication is best.

You can usually get a good job with a trustworthy employer by asking the right questions. For more on those questions see the link below.

Are you confident and ready to teach?

Teaching is not easy. Here's a course that is focused on teaching mostly children that will make you feel more confident in that classroom.