Where should I teach English in Asia? China, Korea, Japan or Taiwan?

Thinking about teaching English in Asia? Wondering where?

I taught English in China, Korea and Taiwan and have also lived in Japan. If you're thinking about teaching English in one of these places then you may enjoy this series as it might help you find the best place for you.

This series started with videos and then later I elaborated on it with a guide and some of the articles below. 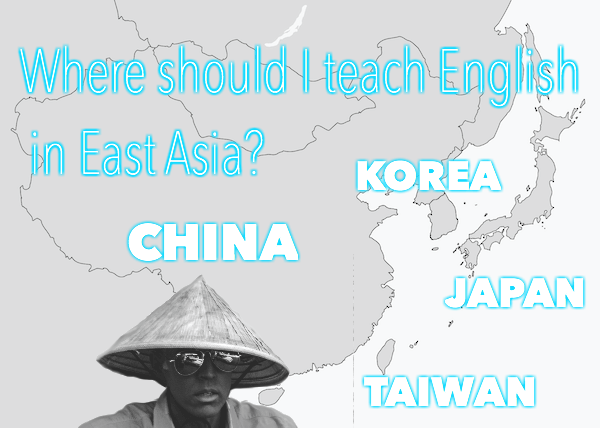 Before we get to the video series here are a few articles that may help:

Is teaching English in China, Korea, Taiwan or Japan for you?

First I might look at what's it like to teach English in China, Korea, Taiwan and Japan?

Here is a transcription of the video:

Alright... Hi there. Where should you teach? So if you are thinking about teaching in Taiwan, China, Korea or Japan then this is for you. First off I'll tell you this. I wrote about this a bit in the Starter's Guide and you can download that on my site. So where should you teach? I am probably going to generalize here a bit and also tell you about my experience a bit. So that's my experience and my perceptions so you don't have to take my word for it per se.

But I think you know I was there at one time and I was trying to decide between a few places, so I am making you this to probably help you a bit. But my opinion is also going to be in there. And it's probably going to be a bit mixed up. I am just doing this off the top of my head. So it could be a little mixed up between the countries and stuff. So, Korea for money, it really depends on what you value and what kind of experience you are looking for when you are going to teach abroad.

If money is important and security is important to you then I would say that Korea is your best bet. They pay for your tickets to get there. They pay for your housing. They take care of most of your visa stuff for you. So I think Korea is the best for money and security. However, in all of these places you can make pretty good money. It all depends on how you configure it, what kind of job you get and how you make it work, you know?

So generally I would say that Korea is the best for money and security. I am less familiar with Japan. I have taught in the other three places, but not yet Japan. In Korea they take care of the visa for you. In the other countries they are not going to take care of that for you. Japan I am not so sure with. In China and Taiwan they will help you process the visa, but in Taiwan you pretty much show up with a tourist visa, find a job and convert it to a proper work visa and get an ARC.

What's the difference between Taiwan and China? Taiwan is more westernized. People have been more exposed to western culture for a longer period of time. People are more familiar with the western mindset. In China in the big cities... they have the internet although the internet is censored.

There is no Facebook - it's blocked and Youtube is blocked. You can still get on those though with a VPN. The people are less familiar and people get the information filtered down from the government. The government is a little corrupt right?

It's the past, the history just what has happened to them. They are generally a little more leery of foreigners than the other places.

Where should I teach English: China, Korea, Japan or Taiwan? Watch the rest of the series.