I taught English in Taiwan in 2004-2006. That's my apartment's window with the cage on it in Taichung, Taiwan. That's a pretty common site in Taiwan. Many apartment windows or balconies will have cage like things like that surrounding them. 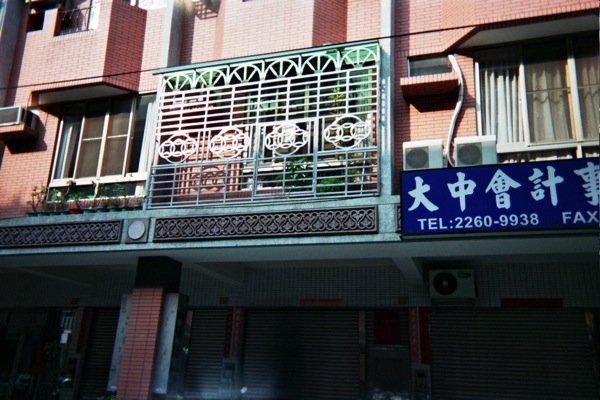 That was on the second floor. But sometimes you will see these on the 5th or 6th floor which can seem puzzling. They are rather ugly, but I think the main reason that they do this is to keep out thieves. Although, don't be afraid as I don't think there is very much crime in Taiwan, or in the rest of Eastern Asia.

That was a fairly new studio apartment. Taiwan's cost of living is pretty cheap. I paid $6000NT (around $200) for that. It had a bathroom and a shower, but no kitchen. A studio without a kitchen is pretty common in Taiwan. Eating out in some sorts of restaurants is fairly cheap and that's what I did for most of my two years there.

Then I was a vegetarian (for 10 years) and mostly still am, but FYI there are a lot of vegetarian restaurants in Taiwan for Buddhists that you can eat at for pretty cheap.

I rented a room in another apartment for a few months before moving into this one. That was during my first contract in Taiwan.