The owner of myTEFL is the troll that wrote that slander and created Eslinsiderreviews.com

UPDATE: the person who originally created the site Eslinsiderreviews.com took it down and I bought the url. So if you go to that site it won't appear as it does here. If you want to see how it used to look then you can enter the URL into the Wayback Machine and look at the year 2020.

Around a year ago I met a troll in a Quora thread with the alias "Jacob Wilbur". He didn't like my comments pointing out his affiliate marketing and harassed me there in this post and then with another fake username on Youtube.

Then maybe a month later I found the site called: 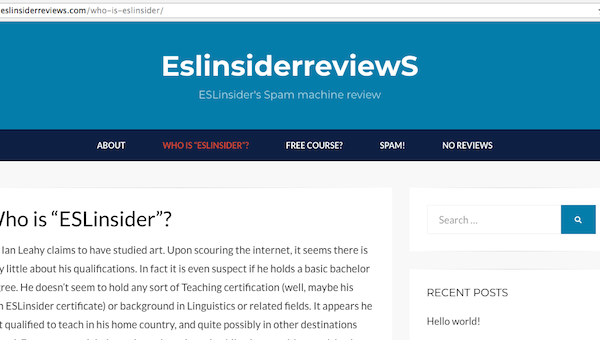 If he is as almighty as he sounds why doesn't he have the guts to put his face and name on it?

All kinds of slander and projection.

My gut feeling was that it was myTEFL because of the mentions of affiliate marketing and advertising.

But why did he attack me?

Surely it wasn't without reason right?

It's because I wrote this review on myTEFL which is mostly a collection of other people's comments on myTEFL on Reddit, blogs and I exposed his affiliate marketing.

Which he ironically says in that post that I do.

I have never done any affiliate marketing with my courses. You can spot an affiliate link by just looking at the link.

Do a search for:

Nothing except articles that I wrote about affiliate marketing in TEFL.

If I had an affiliate program I would advertise it.

How do I know it's myTEFL?

The interaction I had with him.

I sent myTEFL an email maybe a month or so ago asking if he knew about that site and he said no.

Then I asked him again a few weeks later and he said "Nope". 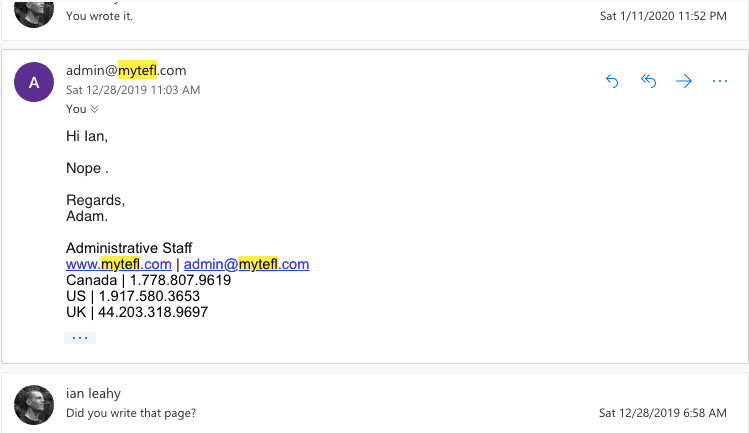 And then yesterday I get an email from a "Barbara Simmons" saying she or actually "we" know who did it.

And a few days later I get a response that said only, "Follow the white rabbit".

So again it's someone who doesn't want to reveal their identity.

No one cares about this except for me and the person who wrote it.

He said that because he is trying to make it look like someone else wrote it.

So I wanted to see if I could confirm my gut feeling by looking at his writing style and some of the words that he used. So while looking at Eslinsiderreviews.com I did a site search of myTEFL.

Everybody has their own unique writing and speaking style. I found a bunch of the same unique lingo used on both mytefl.com and eslinsiderreviews.com.

Here are three words for starters.

By the time you read this he could go back and edit these.

How often do your friends use this term?

So here it is being used on myTEFL. 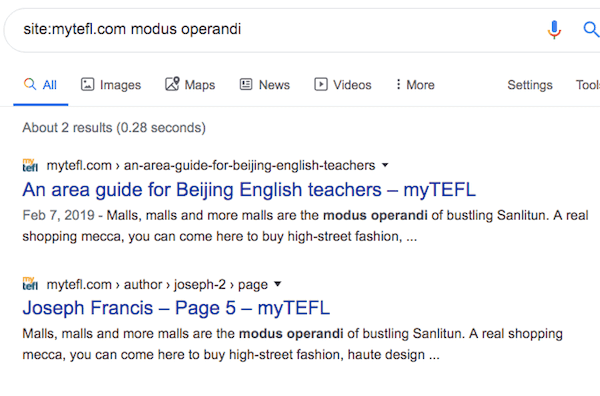 And you'll see this word on Eslinsiderreviews.com.

Is that word in your vocabulary? 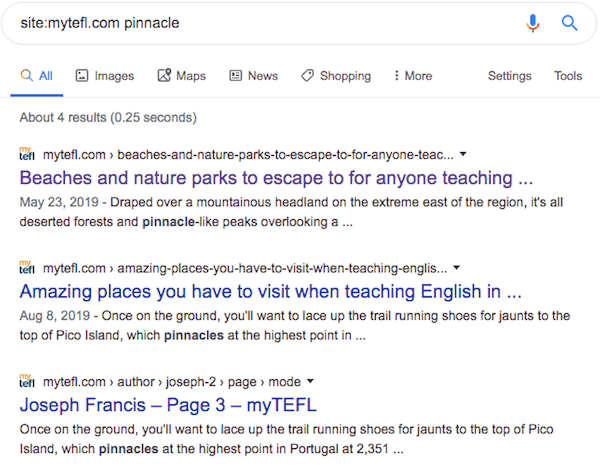 And you'll find it here too.

This is mentioned in the pic above and below on myTEFL. Who talks like that? 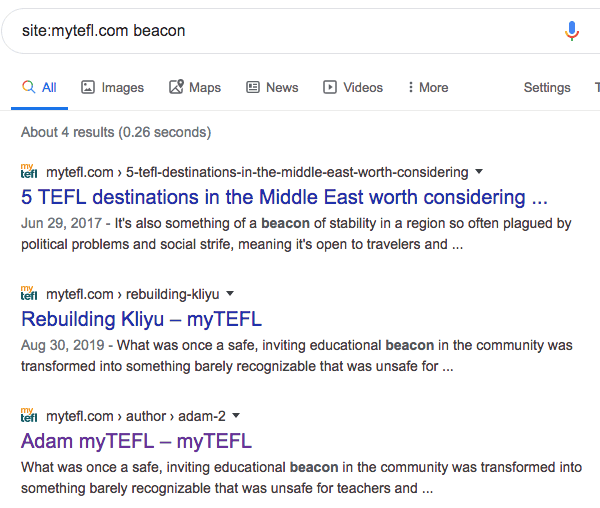 You'll see more on him in a bit.

Here are a few more examples.

You can find more examples of the same unique vocabulary being used on both mytefl.com and Eslinsiderreviews.com.

You can see for yourself unless he goes back in and deletes those.

"From my research stick with reputable providers like i to i, premier tefl, mytefl, bridge tefl, tefl academy... There is a guy on here who 'spams' his own course around like crazy trying to get sales. It has no external reviews..."

That was his answer to "What are the best jobs for travelling around the world?".

Here he is again commenting on "external reviews". 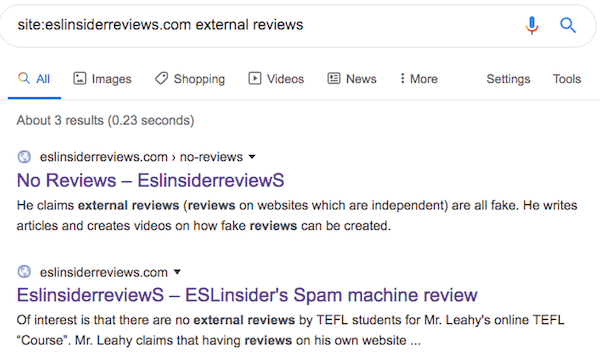 Looks pretty similar to me.

He said I had a "free TEFL" scam

And he questions the numbers of users I had. 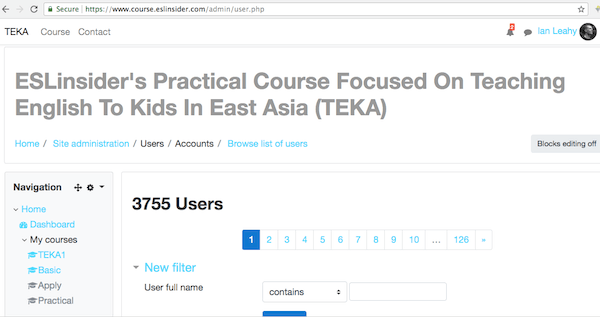 That's a screenshot from inside my course.

Look very closely at the top of this screen shot found on eslinsiderreviews.com/no-reviews

If you look closely at the top of this screenshot that is on Eslinsiderreviews.com you will see that it says:

reviews do not include affiliate links which you will soon 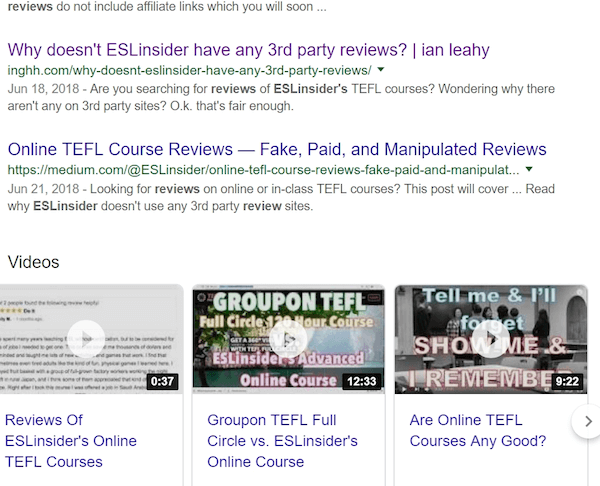 Now search that and add the word "eslinsider" to it and see what pops up in Google.

Ohh...What a surprise it's the "myTEFL review".

Guess he forgot to crop that off.

What I think about 'qualifications'

I really don't care about where your degree is from or what your qualifications on a piece of paper are for that matter.

I am not impressed.

Your degree doesn't make you any better of a person, teacher, artist, businessman, chef, musician, etc. Most skills can be learned with or without a degree to back it up.

One of the most inspiring people for me is KRS-ONE. He doesn't even have a high school diploma, but occasionally lectures in Ivy league schools around the USA.

If you weren't aware plenty of people have found success in life without a degree.

But actually I have a degree (BFA).

And you'll find some creative stuff in this site or you can see here.

And I have taken 2 different TESOL/TEFL courses (not including the ones I've created) and they are mentioned throughout the blog on articles about TEFL courses.

Yet, none of those things matter.

If you think that you're better than someone because of your degree then you're just a pretentious snob.

I don't have impressive degrees or certifications. You can find teachers out there with better qualifications on paper, yet...

How many classes in college and high school went in one ear and out the other?

I think there is value to learning from someone who has experience, but who isn't overly educated or doesn't try to impress you with fancy words or jargon.

Someone that breaks things down for the average Joe so that he can learn how to teach instead of teaching you a bunch of theory, grammar and stuff you will never use in the classroom.

If I told you that I was a black belt in ____ (insert martial art). You'd probably be impressed.

The belt says something, but it's not everything. And everyone who practices a martial art knows that. To the outsider that black belt implies that they are the best or one of the best, but the insider knows that it goes deeper than that.

Even if you have a higher belt than the next guy you can still lose.

The belt has some meaning to it, but it's just one metric and the same can be said of any degree or qualification.

Ever see the movie the Matrix?

Blue pill TEFL is a mirage. Some courses out there will tell you lies and many things that you want to hear, but it's not the truth.

The typical TEFL facade is one that makes a company look bigger and more prestigious than it actually is.

And there are a ton of copycats.

Some of his fake names

And I am sure he has many more.

If his real name is Adam he never reveals more than that except maybe Adam K.

It's the same on his site too. The about page on myTEFL is just like any other TEFL course about page.

Oh, what a surprise.

I was searching Youtube or myTEFL and found this guy named Adam.

And he said he was from Vancouver. 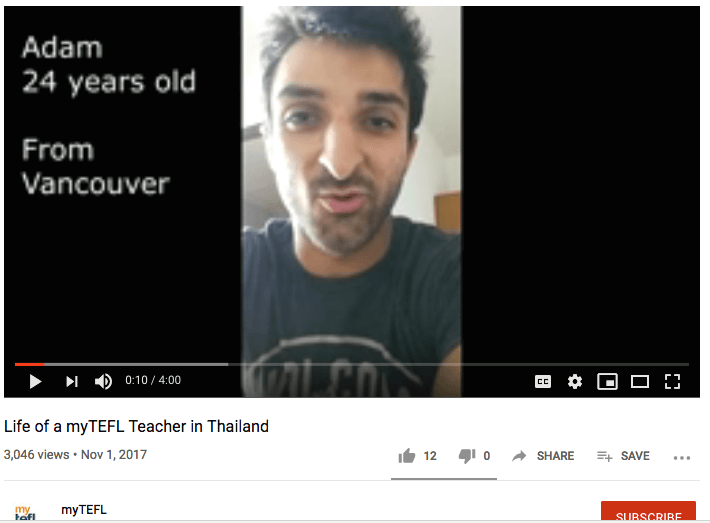 The beginning of that video (after you push play) is titled "Life in Thailand by a myTEFL intern".

So does that mean he's an intern in his own business?

And myTEFL says it's located in Vancouver. 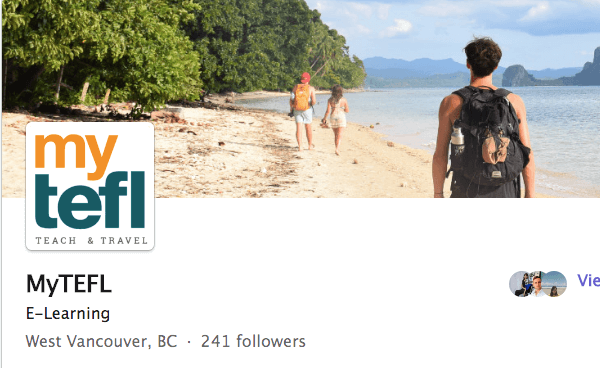 And here is a PR post by an Adam from myTEFL.

If I found all this deceptive information on myTEFL then how much other stuff out there exists?

I found this post on TEFL online pro that looks pretty similar to "Eslinsiderreviews.com". I didn't read the entirety of that post, but in this case agree that TEFL online pro and "Trusted" TEFL reviews are a scam as I have written about that before.

But you can see that eslinsiderreviews.com and teflonlineproreviews.com look quite similar and the voice of the author is similar. Here's how...

And if you look at both eslinsiderreviews.com and teflonlineproreviews.com I think you will see that the writing style is similar.

There's another tool I used a tool called whoishostingthis.com to check.

And why would myTEFL want to write a review like that?

site:trustedteflreviews.com myTEFL you will see some negative reviews.

Why I am writing this?

If someone makes up lies about you or tries to make you look bad online then how are you going to feel? I spent the last year looking at this guy's trash whenever I search my site online.

I talked about the lies in the TEFL course industry before I even had a course. You can search for the article:

TEFL/TESOL courses are a waste of money

Because I thought that course I took was not helpful for preparing me to teach in Taiwan (where I started). Not to mention the lies that they told me and I see those lies continue around the web.

Am I supposed to turn a blind eye to the lies out there just because I have a course and resources for teachers too?

I've seen some 'competitors' suggest that.

And suggest that I should mind 'my own business'. But part of my 'business' has been cutting out the BS.

I didn't start with a 'course' I started with the fact that the easiest way to learn how to teach is by watching other teachers in the classroom and that's why I made how-to videos.

And then only later came a course.

Reviews on other online TEFL courses