Yellow Fever? - A new perspective on the attraction to Asian women 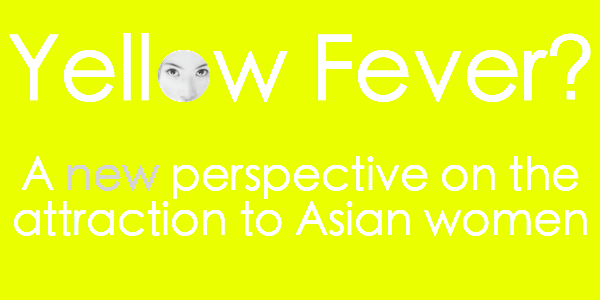 Do I have a fever if I prefer American women?

What if I said I prefer blondes?

Does that mean that I have blonde fever?

Do I have a fever if I prefer the color red to blue?

Do I have a fever if I tend to find Caucasian women more attractive?

Why is it a fever anyways?

Don't some people find these terms to be racist?

The word "fever" suggests that there is something wrong with the person for being attracted to a person of a different race and that they are abnormal or have a fetish. But what if I said I was attracted to Caucasian woman and I am Caucasian?

I bet you wouldn't think that was weird since that's how most people are, but why isn't that weird? In fact it might be kind of weirder since it's more incestuous like. Most people date and marry people of their own ethnicity. Does that mean they have a fetish for their own race?

I made a Youtube video called Why the Obsession with Asian Women and it received quite a few comments. Obsession is a strong word and that's why I chose it. However, to be more accurate it could have been why I like Asian women. It turns out I am not alone as other Caucasian and non-Caucasian men prefer Asian women.

And before I continue there is a difference between an Asian and an Asian American. When I mention the word Asian I am referring to Japanese, Chinese, Korea, etc. not to Japanese American, Chinese American, etc.

"They like Asian women because they can't get a white woman"

I have seen this sort of comment several times in videos including mine and others related to "yellow fever". This is one of the most ignorant comments I have come across. I would guess that this person is a white male or maybe a white female. Doesn't this sound like a rather racist comment?

To me it sounds like something a white supremacist would say.

It's not only the white guys who are going for the Asian women. The Asian women are going for the white guys. And they are not alone according to that study all races except black women tend to prefer white men. Why? I am not sure. Maybe it's the look, the money, the status, etc. According to statistics gathered from online dating sites women tend to choose men with high incomes. So a boost in status could be it.

There is a word called hypogamy that refers to when women marry a man of higher class than themselves. Normally people marry others of similar social status. Yet it's pretty common place in Southeast Asia and in Eastern Asia to see local woman marrying white men. It's also pretty uncommon to see them marrying anyone else other than men of their own race or white men. It's not only happening in Asia. Many American men are finding wives and love in other countries such as in Russia.

Here's a funny excerpt from the Joe Rogan podcast with Randall Park and Eddie Huang:

"There's a lot of anger and resentment in the Asian community when Asian girls would exclusively date white guys."

They are more attractive in a sense by being cuter like a baby.

The stereotype is that Asian women are passive, delicate, quiet and that western men (Caucasians) are masculine and powerful. I'd say that on the surface some of those things could be said as true. Before you freak out I do not think all Asian women are quiet, shy or submissive. There are certainly loud, obnoxious and controlling women in Asia too.

But compared to American women as a whole I would say that Asian women are more attractive, quieter and not as controlling. Whether it's the Asian facial features you like or body size (obesity is rare) I think most American men living in Asia would agree that they are more attractive.

I believe that there is a cultural influence that makes them more shy, docile or perceived as submissive. Maybe because most of Asia was a male dominated household. Things are changing though. Most women there now have jobs, more independence, and some are single (in their 30's & 40's). They also watch Sex in the City too. I have an old friend from high school who teaches ESL at a college in Florida and when I asked her about her students from Asia she described them as "shy".

And if you are Asian and not shy then great. If you are Asian American and not shy then that's also great, but I am not referring to you. In Why the Obsession with Asian Women I mentioned that Eastern Asian culture is more feminine (yin) and western (American) culture more masculine (yang). Feminine in the social sense (relating). I said that I saw the US as being more extroverted and Asia as being more introverted. Individuality is part of being an American and with that comes ego and masculinity.

Are white men more masculine or powerful? Some people think so. While things are changing white men do tend to have a higher status as they do tend to make more money than other races and sexes.

Not every Asian is studious or excels at school, but nearly everyone is going to get some pressure from the culture and/or their family to do so.

These are "American women". They may be Asian by race, but their mindset is that of an American woman. I think some of these woman are confused. For example, the mindset of a Chinese woman and a Chinese American women is totally different. It's like me saying that since I am mostly an Irish American that I am Irish and an expert on Irish ways, culture, etc. I cannot define myself as Irish, I am an American.

Most American women are very PC. 2/3 of them are also overweight. They have the courts behind their backs and they feel entitled due to feminism. The idea of individuality is big in America. They think they are different and unique. And to some sense they are, but everyone is not as unique or different as they think. Many people have more in common with other people of their same race, culture and age than they know of.

An American who claims he is Chinese is only telling part of the story.

Go to China and tell the Chinese there that you are Chinese and they will laugh at you - at least some will. In fact as an Asian American you may feel ostracized a bit as on the outside you are going to fit in, but on the inside you are a foreigner.

Here are a few related videos that were created by Asian American women.

"They all (Asian women) look good"

According to some that's what yellow fever refers too. Who really thinks they all look good? Not me, but I do tend to find Asian women more attractive than most other women. I think pretty much all people have a type or kind of person that they tend to be attracted to. Maybe you like big butts, big boobs, broad shoulders, black hair or a lean stomach. It's just nature. It's not exclusive and personality is a factor - at least in the long run.

I have seen many attractive women of different races, but as soon as they opened their mouth I wasn't attracted anymore. As is often the case with Asian American women. On the outside I have found some to be attractive, but as soon as they spoke I could tell that they were American and my interest waned. And it's not only the fact that they were American. One's voice is a better predictor of personality than one's face is.

Aesthetics are the starting point

The way a person looks is often what inspires someone to take action towards meeting that person or developing a relationship. I think everybody has to be at least a little physically attracted to their mate. In one study on facial attractiveness Asian women were considered the most attractive females.

Some feminists say that these Caucasian men who have "yellow fever" objectify these Asian women as sexual objects. "Objects" is the feminist word. Men see women in a sexual light period regardless of their race. And if they didn't why are you spending all of your money to look good?

Some prefer Caucasians, some prefer Latina women, some have no said racial preference and most prefer their own race. This has nothing to do with the fact that they are Asian. I think you either find someone attractive or you do not. And if you do then you have sexual feelings for them.

Maybe some men do have "yellow fever"

I suppose if you think that all Asian women are attractive then you might have a problem. I suspect some of that has to do with your survey size. Go live in Asia and then tell me if that is true. I think after you are exposed to more Asian women you will have a better idea. I think that is similar to when people say that all white, black, or Asian people look the same. The ones who say that usually have little experience relating with the races that they think look the same. That's ignorance.

And maybe that is also the cause of the so called Asian fetish. Maybe the people that have these sort of fetishes - if you want to call it that, have little experience with Asian women. Maybe their experience has just been through anime, manga, or the internet.

If you like Asian culture so much have you thought of teaching or traveling to Asia?

You can check out this guide on teaching English in Asia to learn more. And if you got a Bachelor's degree (in anything) then you can probably teach in Asia however, you could also need additional qualifications. So if you got the right qualifications, you want to explore and you want't to learn then you might be a good fit for it.

This entire site is built around my experience teaching and living in China, Korea, Taiwan and Japan. There's a blog (that you are reading now), how-to videos, and totally helpful courses on teaching in Asia.