How living in Busan is better than Seoul

Busan vs. Seoul? Hmm... Not sure if you should teach English in Korea in Busan or Seoul? Then this is for you, but I have to tell you that I am biased as I prefer Busan. I lived in Busan for close to three years and visited Seoul a few times. I think Busan is better for the most part, but there are a few things that Seoul is better for. Let's take a look.

Here's a little drawing I did that compares some of the differences between these two Korean cities. After the picture you will find further details on the differences. 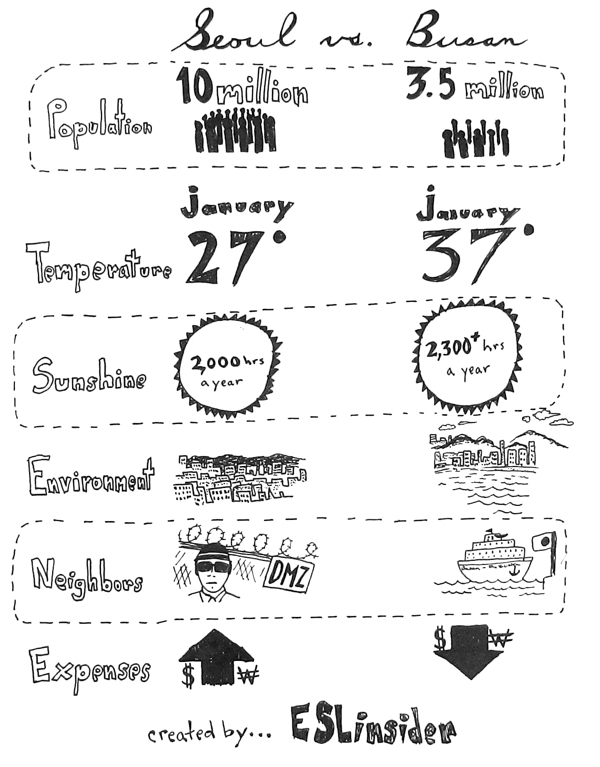 The weather is going to be better in Busan, unless of course you like the cold and the snow. I remember seeing snow flurries fly one time in Busan, but it didn't stick. In Seoul the daily average is about 27 degrees in January and in Busan it's about 37 degrees (taken from Wiki). Even though the winters can be cold in Korea chances are you will have heated floors. Those are really nice.

The summers will be hot in both places. You're going to see more sun in Busan as well, approximately 2,327 hours of sunlight a year versus 2,000 in Seoul.

Seoul is more sprawling. It is relatively flat with the Han river running through it. There is Namsan mountain with the tower on it and mountains to the east.

Busan has several "centers" of the city such as Nampodong, Seomyeon, PNU, Kyungsyung University and Haeundae. It's spread out among the mountains and lies on the coast. One thing I liked about Busan was that pretty much wherever I was in the city I could get to a mountain to hike within a few minutes.

There are beaches in Busan

Busan has some decent beaches such as Seonjeong, Haeundae, Gwangali and Songdo. Haeundae is the popular one and in the summer time it seems like all of Korea heads here. These are not the best beaches in Asia, but some are pretty good and it's better than what Seoul has to offer.

There is less pollution in Busan

Busan is going to have less pollution. Since it is smaller and sits on the coast the air is cleaner. Seoul sits in a basin and tends to collect more pollution since it is larger. It can get pretty smoggy.

You can check out some photos of Seoul's pollution.

People say that the people in Busan are easier going

People say (even Koreans) that people in Busan are friendlier and more laid back. I never spent enough time in Seoul to say really. I suppose that goes for most big cities anyways. People in big cities tend to be less friendly.

Busan is close to Japan

A cool thing about Busan is that you can take a hydrofoil to Fukuoka (which is awesome) in like 2.5 hours. Or you can take an overnight ferry which is cheaper.

Seoul on the other hand is close to North Korea.

The bigger the city you live in the more you're going to pay for expenses. So you are going to pay more in Seoul for rent, food, transportation, etc. and you probably won't make more money teaching or much more money.

So where is Seoul better?

Compared to Busan Seoul is going to have more variety. You'll find more shopping, bars, nightlife, big bands, English bookstores, restaurants, cafes, galleries, K-POP stars, etc. If you are into the urban thing then this is probably your best bet for variety and options.

There are also more foreigners in Seoul. So you will stand out less than you would in a place like say Miryang.

Seoul or Busan for teaching English?

If the big city life and a more cosmopolitan lifestyle appeals to you, go for Seoul. I can understand that because at one time I chose to live in Shanghai (24,000,000). But keep in mind that a lot of people want to teach in Seoul. So it's a more competitive market.

If I had to choose again between the two I would still choose Busan as I find it to be a better all around lifestyle. If you are interested in Busan you might like checking out Koreabridge. It's a resource for teachers in Busan. You can find a job there, classifieds, clubs to join and more.

On the other hand if I was to go back to Korea I would probably move somewhere smaller like Gangneung or Jeju island.

"...Being Korean American. Everybody expects you to speak Korean, but I don't. But at least people in Busan are friendlier than in Seoul."

I interviewed Anne along with another 15 or so teachers on Haeundae beach in Busan where they shared their challenges and gave advice on teaching in Korea. On my brief visits to Seoul I don't remember if people were unfriendly or not. But it makes sense, the bigger the city the less friendly people will be.

"Now we live in cities with millions of people and you can legitimately encounter a stranger and say ‘I’ll never see that person again—and get away with treating them poorly.’ That’s less so in small towns, where almost everybody does know everybody.” - U of M

Now something to keep in mind is that Busan is smaller, but it's still 3.5 million people.

GET THE INSIDE SCOOP on teaching English in Korea

Here are some things that you will get when you log in to this course.

And a whole lot more about the actual teaching that includes many how-to videos shot in public schools and hagwons in Korea. The teaching is coming soon... Do you feel confident in your ability to teach?

Yes, I want to learn more about teaching in Korea.