The best place for YOU to teach English abroad

I mean what you really want to know is what would be the best place for you to teach abroad right??? I mean one person's best isn't necessarily yours.

So after some reflection and my own own experience teaching in Asia: China, Korea, Taiwan and now living in Japan I wondered if there was a way to find a person's best place. I am not sure, but I compiled this list of questions that you can ask yourself. 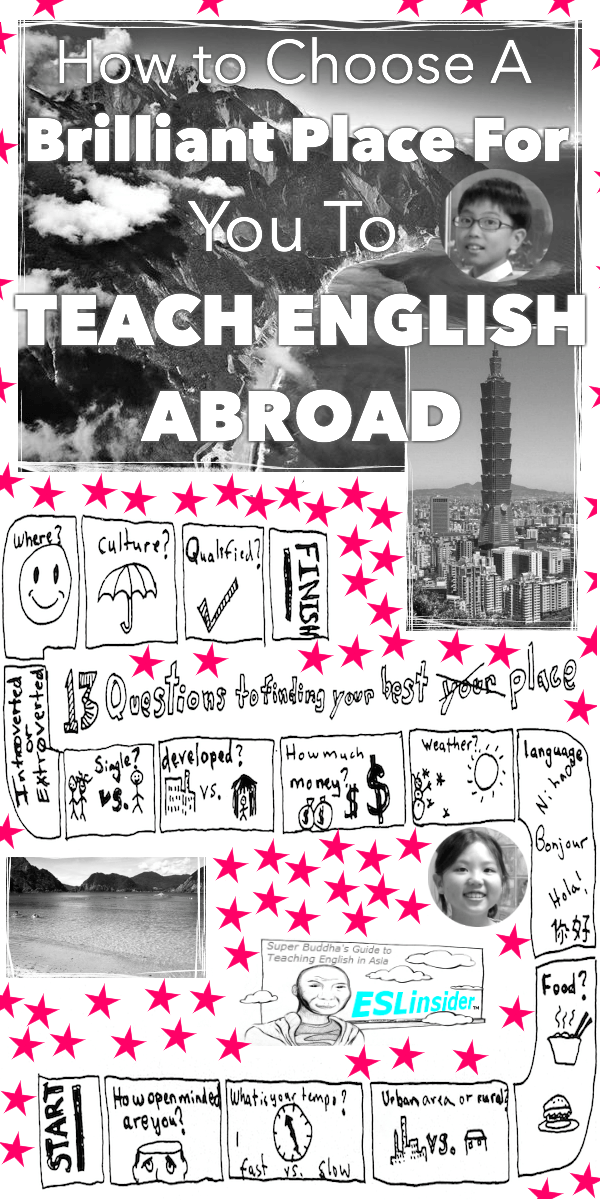 1. How open minded are you?

I think being open minded is a necessity for teaching abroad. You are going to be exposed to so many new things. Things that you take for granted now will be absent when you are abroad.

The language, food and culture will all be different. If you are not very open minded you might want to consider staying home or maybe consider a more westernized cosmopolitan area abroad.

Although keep in mind that you will still be in a different country.

Are you easy going or are you more of an intense busy kind of person? Different cultures have different associations with "time". For example, in much of Central and South America it's o.k to be fashionable late. People tend to be more present moment orientated.

For example, I had a jiu-jitsu teacher from Brazil who frequently started class 10 or so minutes late. But in Japan it's not normal at all to be late, so you can expect classes and trains to arrive on time.

So different countries are going to have a different perspective on time. I recommend this test to find out your own perspective on time. This could help you to find a better match. So if you are laid back then you might like a country in Central America or in Southeast Asia better than you would say a country in Northern Europe or in Northeast Asia.

There are some differences within countries too like most people would say that the tempo in New York City is different than the tempo in San Diego.

3. Do you prefer living in an urban area or a rural one?

Do you prefer to live in a city or in the country side? The largest urban areas in a foreign country are going to be more cosmopolitan. You're going to have more options. There will be more places to shop,  a greater variety of restaurants to eat at, groceries to buy, English books to read, clubs and groups to join, bars and discos to go to, other foreigners to meet and more.

On the positive side this can be a more stimulating place to live, but there are some things that come with that too such as traffic, pollution and crowds.

If you are in a rural area you will have a more laid back lifestyle and you will have less options like the ones mentioned above. This can be more of a cultural experience, but it can also be more isolating.

Some people who go abroad have difficulties with the food. As you can imagine the food is different in another country. So if you have conservative food tastes or don't like trying new things you may have some difficulties.

It will be possible to buy some food items from your home country either in a grocery store or in a restaurant especially in a big city, but you will have fewer options.

If you start to feel homesick then you could try going to a restaurant where you can get some familiar food.

Some of the teachers that I interviewed in Korea had problems with the food because it was too spicy. I didn't think it was very spicy, but it all just depends on you and your tastes. As I noted above you may love Chinese, but after eating it for a month straight you might want something else.

And that's why living in a bigger city with more options is nice. Because if you in a rural area or even in a small city it can be tough to find different kinds of food that you like.

5. What language do you want to learn?

I highly recommend that you learn the language of whatever country that you are going to. You can get a jump start on it now or wait until you are there, but I highly recommend it. I have been on both sides of the coin where I lived in China and Taiwan and learned to speak some Mandarin which is interesting and then I lived in Korea where I learned very little Korean.

Which do you think I enjoyed more?

It's a more holistic experience to learn the language as it's going to make you feel more connected to your surroundings. If you don't then you will be kinda just living in a bubble and not getting the most out of it.

Languages like Mandarin Chinese or Spanish are spoken by many people around the world.

This is something to consider. Chances are you have been to different climates. What did you think about them? Can you tolerate the heat, humidity, snow, rain, cold or drought? Think about it and research the countries and places that you are thinking of going. What gets to you? If you don't like the cold in your country then you're probably not going to like it in another.

7. How much money do you want to make/save?

If money is important then some of the best places for teaching and getting paid a good salary or hourly wage are going to be in Eastern Asia and in the Middle East. In Asia you may make the highest salary in Japan, but the cost of living is so high and there are rarely any benefits there.

On the other hand it's pretty easy to save a $1000 a month in Korea since there are many benefits like airfare, free housing and severance pay.

And you could probably save even more in the Middle East in places like UAE, Saudi Arabia and Oman, but you'll need experience and/or better qualifications. While money is important I personally would not make money the most important factor for choosing a place.

8. How developed of a place do you want to live in?

If you want everything to be more modern then you should choose a developed country to live in.

9. Are you single or married?

Most teachers who go abroad are single. Sometimes schools provide housing and if they do it's usually single housing. Yet sometimes it might be shared which might work for a couple or the school might not mind if you live together in a studio apartment. It's best to ask in advance.

I have also seen some jobs in the Middle East that offer larger accommodation for couples and families.

10. Are you an introvert or an extrovert?

This might make a difference in the kind of culture that you will feel more comfortable with. I'd say the culture in Eastern Asia is more introverted like. People generally tend to be less outgoing and stick with their family.

In Central and South America people are more outgoing. However, just because you're an introvert doesn't mean that you should necessarily go to Asia. Maybe being around a more extroverted culture would be more stimulating.

11. Where are people the happiest?

Here is an interesting study to look at. Did you know that some people are happier in some places more than others? Northern Europe (Scandinavia) tends to have some of the happiest scores in the world. Unfortunately though you would probably have a tough time finding a job teaching ESL there.

However, countries like Costa Rica and Brazil also have high happiness scores. And some Middle Eastern countries had higher scores than those in Eastern Asia.

Is there a country or a culture that intrigues you? Do you love anime, manga or cosplay? Then maybe Japan would be perfect for you. Find out more about the culture of the country by searching on Wikipedia.

Having an interest in the culture that surrounds you will make your time abroad much more enriching.

You usually need a 4 year degree in anything and to be a native English speaker to get a job. These qualifications are usually needed to get a legal visa so that you can work in that country. But it depends on the school and sometimes on the country.

Sometimes you may need TEFL certification, a master's degree or even a teaching license.

On the other hand you can sometimes find work without a degree or even if you are not a native speaker. Again it can really depend on the school, country (some are more strict) and/or what kind of visa you have.

Experience is another qualification that you will see. Most schools prefer experienced teachers, but if you don't have experience don't worry someone will hire you. Everyone has to start somewhere.

Finding your best place teaching abroad can be done if you ask yourself the right questions. It's also going to take some research on your part. That can definitely help you find what kind of culture and environment that you would like to be surrounded with.