Is teaching English in Korea worth it?

So I just found someone asking if teaching English in Korea is worth it? And I thought I would answer it here. 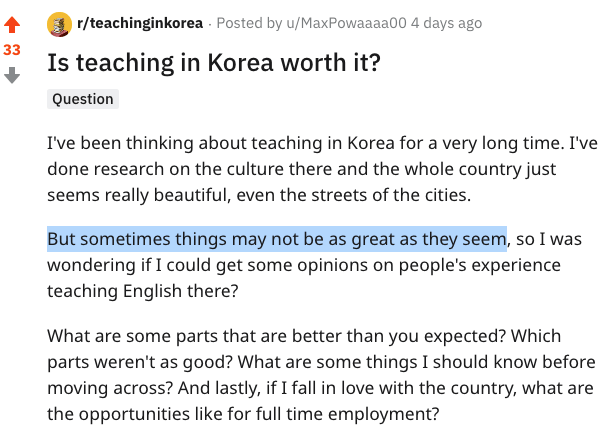 But sometimes things may not be as great as they seem

At least in my experience. Online vs. the real world is a whole 'nother thing. Things can definitely look more appealing online if you ask me.

What was better than expected?

In fact I've seen quite a few comments on Reddit about teaching in Korea. The pollution in Korea will be worse in a city like Seoul and possibly the western part.

Previously I had taught in Taiwan and I was there for 2 years.

Taiwan is more polluted than Korea because you have so many damn scooters. But after I lived in Japan and then when back to Korea I thought it was kind of dirty.

And it just reminded me of why I left which always happens when I go back to a place.

So what was worse than expected?

I thought it was less friendly than Taiwan. I mean it's not everyone some people are friendly, but I had some problems with a co-teacher and a manager.

It's possible things may be better than you expect at least in the short term. Your first 3-4 months are likely to be more fun and interesting and then the novelty wears off like it always does.

You start missing home or you don't like these old people bumping into you or the smells of kim chi and soju. If you go into the subway at night time that horrid stench is what you often smell.

But everyone is different.

Everyone is coming from a different place too. One man's poison is another's medicine. Some people love kim chi and can't get enough of that, spicy red sauce!

But here is fact for you...

Most people don't stay in Korea long term. Most people do a year or two and then they are done with it. That's the TEFL career for most (all over the planet). It's not just Korea it's pretty much everywhere that's looking for TEFL teachers.

Sure, you may last longer and some do, but they are the minority.

Why is it so short?

Lots of things are different. This might give you a taste of what culture shock is like.

How long can I teach English in Korea?

Well, you can teach as long as you want assuming your employer wants you to stick around, but contracts are usually for a year. Short term options teaching in Korea are rare.

"...if I fall in love with Korea what are some opportunities for full-time employment?"

You have two problems.

The visa is always tricky and to get a job teaching in Korea you have to jump through a ton of hurdles and paperwork.

The next problem will be a language one. If you don't speak the language then you are going to have some problems and even if you are fluent you have the first problem - no Korean passport.

You are not a korean so you are going to have a tough time finding anything else.

It's not impossible, but...

You are going to need a special skill and an employer that wants to give you a visa.

The status quo says, it's a "dead-end career"

As I mentioned before most people don't last more than a year or two. But I'd like to add something...

And even if a small percentage of them are teachers then most of them will return home to teach.

Why do you want to teach in Korea?

What's luring you there? What is it that you want to discover? Why Korea and not some other country?

The more things you have an interest in Korea the better. The salary and benefits in Korea might be enticing although if you want to have a good experience there I wouldn't put that first.

So why teach in Korea?

Is it the teaching, the travel, something about the culture, the language or what?

Because it's not a vacation.

Teaching is a job and if you want it to be more fun then I would start preparing for it now. 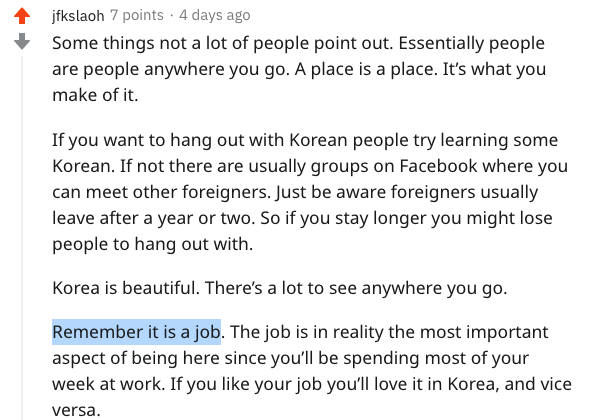 I agree with most of that, except the "vice versa". Just because you like Korea doesn't mean you will like your job or teaching English there. There are lots of variables involved with your job such as: your boss, the students, the management, your co-teachers (if you have them), and your co-workers to name a few.