What I REALLY Didn't Like About Teaching English In Korea 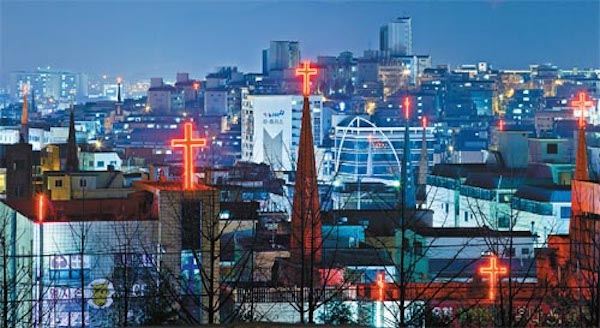 One of the first things that I noticed about teaching in Korea was that there were so many Christians. I mean look at the picture above. That's what the skyline in most Korean cities looks like. What do you see?

So FYI I am not a big fan of religion or politics for that matter.

Surprise. Surprise. There are lots of Christians in Korea

There are sooo many churches and so many brainwashed Christians. According to some numbers they are 30% of the population in Korea.

The two people that I disliked the most while I taught in Korea were my Korean co-teacher in a public school that I taught in and my manager in a hagwon that I worked in. And guess what they both had in common?

I mean if you can mind your own business and not talk like we are all part of your same group AND realize that your beliefs are based on your environment and not some "truth" then maybe I could respect you.

But these people are so brainwashed and in denial of the fact that it is a religion. In conversations with my co-teacher I remember saying, "I am not religious", her saying "neither am I" and then going on about "god" or "god's truth" or some other B.S.

How stupid can you be?

I remember receiving letters from that manager in a hagwon that we should all join god for such and such activity to pray for something or other.

Did you not realize that not everyone thinks like you?

So the Christianity in Korea got to me. That was my experience, but if you are not Christian then that might not be yours. Everyone has a different experience.

There's lots of smoking in Korea

Smoking is the worst habit you could have because not only is it bad for you it's bad for everyone else around you. I really detest cigarette smoke and in Korea people smoke all over the place: public or private it doesn't matter. 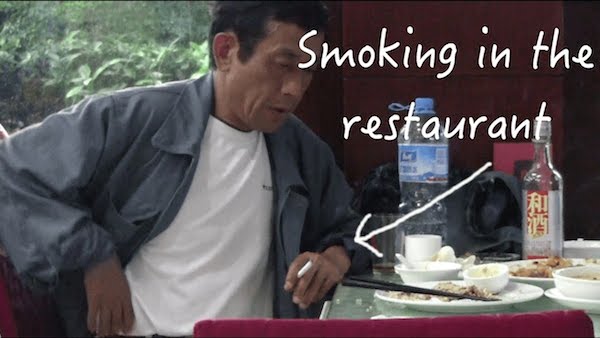 The picture above is actually from a restaurant in Shanghai, China, but you will encounter the same thing in Korea.

In fact a popular place to smoke in Korea is the bathroom. So when you need to use a public bathroom don't be surprised if someone is sitting in the stall smoking a cigarette.

This drove me nuts especially when I was staying in the jimjiban between jobs. Of course almost no one reading this will end up living in a jimjiban for 6 months, lol. But everyone smokes in the bathroom wherever you go.

It's like it's the culturally accepted smoking area. They even do it in some restaurants like above which is actually in China, but it's the same in Korea.

They'll just light up and smoke.

There's tons of Kimchi in Korea, and that spicy red sauce...

Kimchi and Korea go hand in hand. You'll see it often as it pretty much comes with any Korean dish, hear about it and smell it pretty much everywhere. I don't mind a little bit of kimchi if it's not too fishy. They do add fish sauce to a lot of it. 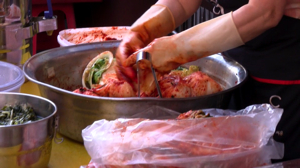 That Christian co-teacher I worked with also had a bad case of "kimchi breath". And I had to sit next to her too during "office hours".

The worst smell that I actually remember is the combination of kimchi and soju (Korean alcoholic drink). You'll find that smell pretty much any night of the week on the subway.

Then I lived in a house in Changwon, while I taught in that public school. It was a small studio apartment with a toilet that used to emit the most horrid stench from the sewer. Guess what it smelled like?

Kind of like a normal sewer smell, but just add kimchi.

So I had to always keep the bathroom door closed.

It could seem very exciting at first and you may find yourself without any complaints. But give it some time because your first few months in a place will be different from the following months. I am not trying to sound like a downer neither.

You are going to have challenges. You can't choose everything that happens to you, but as they say you can choose 'how you react' to those challenges.

You'll get advice and total insight into teaching abroad in Korea.