I think a lot of new teachers going abroad to teach English may be thinking that their school will train them, but is that the case? The short answer is that it depends on the school, but I would not expect much.

What habits or mindsets in Korean management have you noticed that you don’t like? 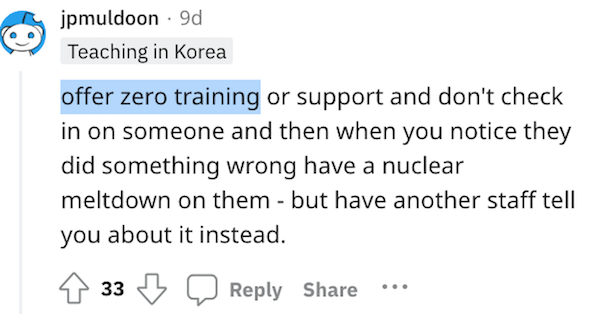 So I thought I'd share my experience in this video.

Did my first school in Taiwan provide training?

I started off as a substitute teacher in Taiwan. I had flown there without any job lined up and put the pieces together. In my first school (Taichung, Taiwan circa 2004) I worked in a buxiban called Gau Jie. It was a chain cram school which is like a private after school program that offers classes for students. I worked 12-14 hours a week and when I started I might have watched each teacher in my school for a class.

There were 3 other foreign teachers there and I sat in the back of their classes and watched. Watching other teachers is a great way to learn.

I remember picking up one simple game from one of the teachers that I used right up until I stopped teaching.

In my second contracted job in Taiwan I worked for a woman who owned her own buxiban near Tainan. She had better materials: a work book, student book and audio programs (Let's Go). And a more disciplined approach to teaching. I watched some of her classes and she watched mine.

In China and Taiwan you are likely to have management watch your classes in the beginning or if you have to do a teaching demo to get a job. It's even possible that the student's parents will watch in the back of the class.

I worked many part time jobs in Taiwan and long story short most schools won't offer much or any training.

Did my schools in Korea provide training?

My first job in Korea was in a hagwon in Busan. I don't think they offered much. I do remember sitting in on one teachers class though so I might have spent a day watching other teachers or at least one class. At that point it wasn't too much of a problem though as I was more confident since I had close to 2 years of experience.

After that job I basically hung out in Korea and worked some part time jobs and then later moved to Changwon.

My second contracted job in Korea was in a public school. I don't recall any training there. And if you teach for the EPIK program they do have some sort of orientation, but it doesn't sound very helpful. Here's a review from George on ESLinsider's course who made it sound like EPIK's training wasn't very much.

Did the school that I worked at in China provide training?

I briefly worked in a training center for kids in China and I don't remember much of any training, but I remember parents sitting in the back of one lesson looking at me very sternly and the manager as well.

That sort of thing (being watched) is common in China and Taiwan.

Will that TEFL course train you enough?

I doubt it. I mean you might pick up a few things at whatever TEFL or TESOL course you will take, but in my experience not much and that is what lead me to creating ESLinsider and its course.

Learn more about why most online TEFL courses aren't any good.

It depends on the school, but don't assume that your school will train you. If you ask me teaching English was definitely more difficult in the beginning. Chances are you won't get much more than a day and you will be thrown in a classroom and be expected to teach.

So the training is on you.

If I was to do it again then I would invest early on in training because even if you only teach abroad for a year it will make that year much better and better for your students. You can take courses, attend workshops, read books, watch videos, etc.