Riding A Bike In Asia: Japan, Korea, Taiwan and China

This article is going to focus on riding a bike in East Asia as a form of transportation. I have lived in Taiwan, Korea, China and now Japan.

Are these bicyle friendly places?

Japan I'd say is the most bike friendly place out of the four. Although they are really strict with bikes. The cops may stop and ask you for registration. As a crime prevention measure most people register their bikes here. So it will have a little number on it.

I was stopped once for not riding with my light on at night time. And the women kind of harassed me for a bit for not having a registered bike and then let me go. Apparently there is a lot of bike theft in Japan or at least was. I didn't have my bike stolen here but I did in Taiwan.

Many people ride bikes in Japan and it doesn't seem to be as much as a status symbol - or lack of status as it is in China and Taiwan. I thought that was very refreshing when I went to Fukuoka for my first visit.

In Taiwan it's not very common to see people riding bikes on the streets. The streets are not very biker friendly and even many of the sidewalks are not pedestrian friendly.

There are millions of scooters and then there are cars, taxis and buses.

A friend explained it to me once like this: the buses are like the whales, the taxi drivers and cars are like the sharks and the scooters are like the fish. There's a lot of fish and sometimes they spill out onto the sidewalks where they are often parked.

I had a pedal bike in Taiwan for most of my first year there and this was kind of rare.

Few people ride pedal bikes there and the ones that do are usually too young to drive a scooter or perhaps too poor to afford one. I felt that there was a kind of stigma too. An attitude like if you don't have a scooter or a car then you're totally uncool.

So you might not rank too high in terms of status if you ride a pedal bike. 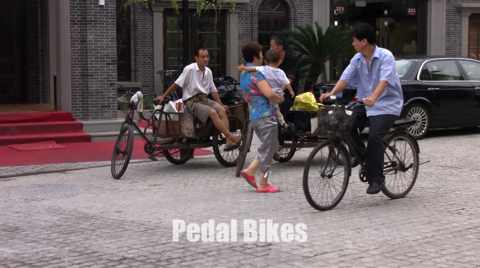 Do you have any interest in teaching English in Taiwan?

I didn't ride a bike when I lived here, but I'd say that that attitude of status is also somewhat in China. You may be considered uncool by the middle and upper class if you're riding a pedal bike.

In China, you'll see all kinds of different bikes and contraptions on wheels. It's better than Taiwan though as there are lots of electronic bikes vs. gas powered scooters and motorcyles.

Do you have any interest in teaching English in China?

In Korea I didn't have a pedal bike. I got around mostly by subway or bus when I lived in Busan. However, I did live in Changwon which is a nice little city about an hour west of Busan. It's considered a "green" city.

Many of the houses in my neighborhood had solar panels on their rooftops. And the really cool thing about Changwon is Nubija. Nubija is the public bike system. There are various bike stations throughout the city where you can get a bike.

You pay a small fee every month or so to use the bikes. You get a card and then you go to the station and get a bike and then you can ride it to the next station where you leave it.

I thought this was very cool.

Do you have any interest in teaching English in Korea?

If you ride a bike in China, Korea or Taiwan you may find that your rights have been minimized. I mentioned before about the buses in Taiwan being the whales and so on. So if you were to add pedal bikes to that list they would be more like minnows.

You don't really get much respect at least in their eyes. In the States most people generally look out for bikes and such, but in some places in Asia people may just assume that you know the rules - which are different from the rules in your country.

Japan is different though. It's more pedestrian and bike friendly.

I had a couple minor traffic accidents on a bike in Korea and in Taiwan. These could have been caused by cultural interpretations of who has the right of way. Anyways if you're going to ride a bike then I'd be cautious because the same rules don't apply.

I'd say that in China, Korea and Taiwan that pedestrians or cyclists do not have the right of way.