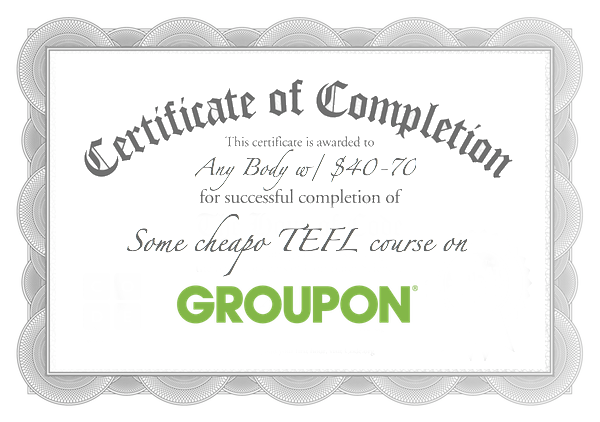 "I finished the entire program in 3 days and retained like 5% of the information." - woobv

If you are looking for a deal or a discount on an online TEFL course then the place to buy one is on Groupon. I have seen courses there going for as low as $5. But is Groupon TEFL legit?

First here are some reviews on Groupon.

Now could these discount TEFL providers continue cutting their prices? For a while the lowest price I saw there was $69 and then later I found one for $39 and then $5. That's a lot cheaper than the $1000 I paid.

But are these courses legit? I was curious so I followed some of the links to the company's website and found that their courses actually cost 5-8X more there.

And more importantly what do you get for your money? I'll tell you more about that later, but first...

Before I tell you about that here's something to consider... 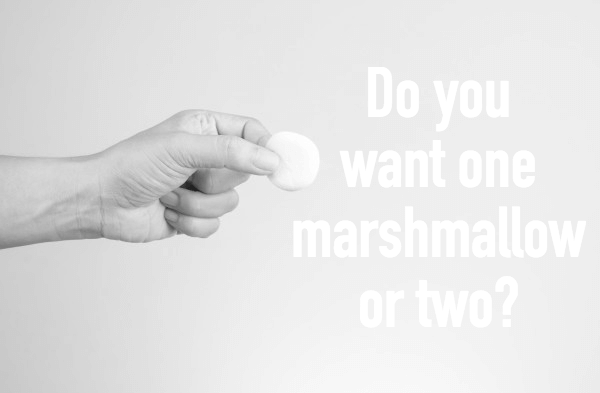 What does a marshmallow have to do with TEFL?

Have you ever heard of the marshmallow experiment?

If you are just focused on getting a certificate for a job then well, cheap TEFL may help you do that because to many schools the kind of certificate that you get won't matter.

But a cheap and easy TEFL course is just one marshmallow. Getting the job is just the beginning and getting a certificate and a job is just a short term victory.

The second marshmallow is doing your job and what you learn. It's not something you get in a couple of days from a cheap and easy course.

Teaching English to kids is NOT easy.

If you don't know what you are doing you will be stressed out and teaching abroad won't be that much fun since you are going to be spending the majority of your time teaching. You have to apply yourself if you want that second marshmallow.

Cheap courses are usually cheap for a reason and some people say "you get what you pay for."

Do you know what the results of that experiment were?

The children that delayed their gratification and waited to get the 2nd marshmallow ended up being more "competant" and successful when they grew up.

So do you want one marshmallow now (cheap and easy TEFL) or two later?

If you teach English to mostly kids this is how to get the second marshmallow.

Now back to the review...

Groupon gets 50% of your money

Many of these online courses are "valued" at $400-800 dollars which is like 5-10X the cost of what they are selling for on Groupon. Does a course selling for $69 that's valued at $800 sound like a good deal to you? Kinda right?

But doesn't that sound a bit weird?

Maybe it's just me.

Yet I thought it looked a little like bait and switch. This is partly because of the huge price discrepancy and at the moment all of the courses that I could find there are either "NO LONGER AVAILABLE" or "NOT YET AVAILABLE".

It's good right or is it?

Well, financially it looks like it. You are getting a "deal". But who knows what you are actually getting for your money.

It's a little confusing for me with the huge differences in prices found on Groupon and the company's website.

Reviews and complaints of TEFL courses on Groupon 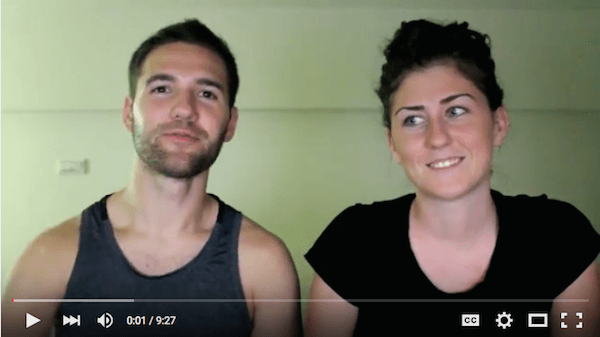 They took a course for $70 on Groupon.

That's true, a lot of courses focus more on grammar and theory versus learning practical tools.

Here's a forum thread about courses on Groupon.

"I took that same course back when I was going to need it (just for appearances, obviously), and I similarly finished it in a couple hours. It's absolutely riddled with simple grammatical errors and typos, and the content is awful. If you don't actually need the cert, you might as well just stop..." - Jeyoc

These are some problems with cheap online TEFL courses and they may not only be limited to cheap courses, but also "low quality" courses.

These courses are typically text-based courses with little to no video. Studies show that most people read very little online (20-28%). So what that means is that you will likely remember very little since teaching will largely be an abstract concept if you haven't done it before.

Typically courses like this work by having you read a chapter or "module" and then they'll have you take a quiz on it.

These courses are cheap for a reason.

These people were searching for their course answers. That tells you one or two things: the course is boring and difficult and or they are lazy.

Groupon brings traffic and large numbers which enables course providers to lower their cost, but in doing so they typically lower their service. Any course on Groupon that is cheap will likely not have the sufficient man power to offer you much or any help.

This can happen with other popular or large online course companies as well.

Who should buy a TEFL course on Groupon?

It's hard to make a generalization like that. But I'd say that if you're someone like below with teaching experience then maybe it's for you.

This is a screenshot of a forum thread that I found on Lonely Planet. 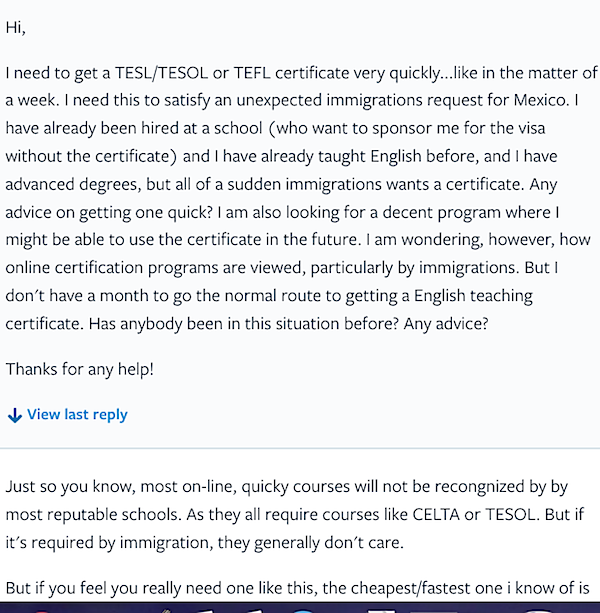 So maybe if you are an experienced teacher, who is in a rush and doesn't want to learn much then finding a cheap course on Groupon might be good enough for you. Although some courses they don't give you a certificate when you actually complete it. They make you wait.

For some schools it is not going to matter whether you take a cheap $39 course on Groupon or take the university based online program for $1000. For these schools a certificate is a certificate. The difference is probably going to be in what you learn.

Is Groupon good for small businesses?

I'd guess it depends. There are a lot articles out there that say no.

"Sucking value out of the small business market will ultimately damage the local merchants that are the bread and butter of Groupon’s base. Groupon’s model is not sustainable. In a race to the bottom everyone drowns." - CNBC

Some people complain that Groupon attracts low quality bargain hunters. I bet that's true. I had a free course from 2012-2016. Previously I had periodically stopped the course and received complaints like, "Where is my free TEFL course!!" Yep, it's definitely attracted a fair number of questionable people.

Is it good for your reputation?

When you sell something for cheap some people will probably liken it to a "scam". So putting your course on Groupon is probably not going to make your business or TEFL course any more reputable.

Why I wouldn't give Groupon my money

I don't think Groupon is really helping small businesses. I look at it like Walmart. When Walmart moves to town many small businesses go out of business. You may be getting a "deal" on Groupon, but do you think you are that smart because of it?

Will you be getting anything else besides a deal?

Half of your money goes to Groupon. The other half to the course provider which is like $20-40. You're helping Groupon more than you are the TEFL community.

I'd rather give my money to the mom and pops store rather than Walmart, Walgreens or some other faceless company.

Is Groupon for you? I don't know, but I think I won't be participating in it. There seems to be too many complaints about Groupon and I think you just devalue your course by putting it there. If one person sells a course for $69 to compete the next one will go lower all the way to $39. What do you think is next after that?

If you are looking to buy a TEFL course or get a certificate then you might fair o.k, but I don't know what kind of results you'll get or how much you'll learn after you get your "deal".