So what exactly happened? First I'll tell you a bit about the environment. You can see where this happened in the picture below. This is where all of the English classes took place. Typically 5 or 6 desks where grouped together into a table like fashion for a total of 6 groups. And this student was sitting in the bottom right-hand corner of this picture in the seat next to the the girl with glasses. It happened in a different class, but that was where he was sitting. 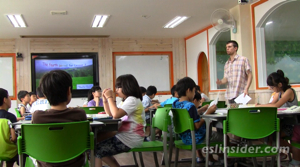 So that day I was having one of the normal classes mentioned before which were larger. Those classes were around 30 students. My co-teacher was talking or teaching from the podium like she always did and then I saw one student who seemed to have a painful look on his face. I did a double take and could see his head arching back. I could also see what appeared to look like a hand moving around near his groin. It wasn't a look of pain, but a look of ecstasy. Funny how they look similar. I thought no way, he is not doing that.

I couldn't understand why none of these students sitting next to him thought what he was doing was weird. They didn't even look at him. No one seemed to notice. It was as if no one was aware of what he was doing except for me. Maybe it was because he was only a 5th grader. That's right just a fifth grader.

I really didn't want to spoil his good time, but I thought I should do something as this seemed a little inappropriate. So I went over to him. Fortunately he had his clothes on and he hadn't exposed himself. Then I tapped him on the shoulder. He suddenly looked up as if he had been awakened from his fantasy and told him not to do that in the classroom.

That kid was always a little odd and goofy. He seemed to understand me, which was surprising as he rarely spoke English. As you may have guessed he wasn't the best student. He tended to hang out with other students who could be trouble makers.