Interview: This Guy Has Taught English In Korea, Uganda And Turkey 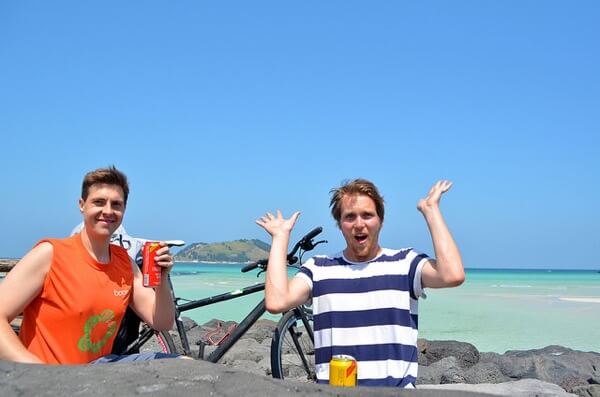 This is an interview with Jamie (on the right) who has taught English in Korea, Uganda and Turkey.

Where are you from?

I'm from a small village in the east of England.

Where have you taught English?

I did a bit of volunteer teaching in Uganda after university, then taught full time in South Korea and Turkey.

How did you like the volunteering position in Uganda?

It's a beautiful country with wonderful people. I loved it so much that I nearly didn't leave and two of my friends actually did end up staying in the country a while longer. Everybody is friendly and smiling and they have so little, but give so much.

What did you like the most about teaching English abroad?

The kids were great, mostly. They are super friendly and interested in stories you have to tell them and discipline really wasn't a problem for me. In Turkey, I found it to be the exact opposite and I hated it with a passion.

Aside from the teaching how did you like living in Turkey?

It was one of the worst experiences of my life. I had a terrible landlord who made life very difficult and I taught at a school where students came and went from classes as they pleased. It got better for the month I was teaching there, but it seemed like many of the teachers had given up on making the kids behave.

Do you think there are any differences between the kinds of teachers that go to Korea and say Turkey?

Many teachers in Turkey are not from native English speaking backgrounds and work illegally. The working conditions in Korea are much better and far more financially lucrative.

What are the conditions like for teachers in Turkey?

What kind of money do teachers make there? Very little. I had enough to buy metro tickets, buy nice food, and pay my rent in a horrible apartment. I wasn't able to save much money at all from my time in Turkey.

How did the two places in Korea that you taught in compare?

Daegu is a big, grey city, hard to distinguish from other Korean cities, but living on Jeju was paradise by comparison. I could wake up in the morning and go hiking or jump on a bicycle and be at the ocean in a couple of minutes. I highly recommend Jeju as a place to live.

Ian: Korea has some uninspiring apartment buildings and architecture for sure.

What did you like the least about teaching in Daegu?

The monotony of Daegu was too much for me. With little to do, a big part of the teaching culture in Daegu is to go out and drink which becomes tiresome. After growing up in Europe, I think I have been spoilt with beautiful cities and culture, two things I could not find in Daegu when I lived there.

I generally worked from about 3 or 4 pm to 9 or 10 pm. On Wednesdays I didn't start until 7 pm, so it was pretty easy going.

What places do you recommend checking out in Jeju?

Get a bicycle and cycle around the island. You will stumble upon places that you don't know about and get to see the whole coastline.

It's cold in the winter, too cold to swim for sure. The mountain is pretty in the snow though and a great place for hiking.

Were you on the south or north of the island?

Did you make less money teaching on Jeju?

I wasn't teaching, but my girlfriend made similar money to what I made in Daegu. Jeju is more expensive, but the opportunity for free entertainment (beaches, mountains) outweighs this.

Ian: Many of the jobs on Jeju that I have seen posted on Dave's ESL Cafe were a bit lower than the average in Korea. Perhaps that is the payoff of living in a nicer environment.

I'm glad that I taught Korea for a year, but after a year, I was ready for something else. The kids were nice, but I wasn't challenged enough and I'm not one for routine, so I was always going to leave after one year.

How much money were you able to save teaching in Daegu and Jeju?

I saved far less than I intended, but I was able to go out for dinner multiple times a week, and go away for trips at the weekend. Despite my excessive spending, I still walked away with several thousand dollars in my pocket.

What was it that you find to be difficult about teaching teens?

The teens in Korea have had their souls crushed and buried beneath an endless torrent of tests and homework. The little kids still bounced and smiled.

Ian: I agree. I prefer teaching children. Teens were mostly a moody bunch and were sometimes reluctant to speak.

Any advice for aspiring teachers?

Teach the age group that you like teaching. For me, I like younger kids, but ended up teaching older kids quite often. It wasn't a big problem, but I wish I had found a job with a greater focus on the younger ones.

You can learn more about Jamie at his site Great Big Scary World.