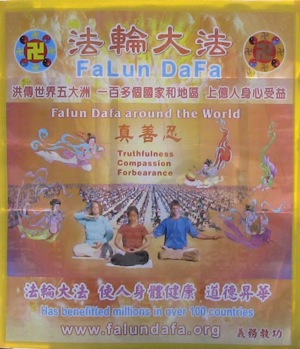 Falun Gong is a practice of meditation and gentle physical exercises. The three basic principles of it are truthfulness, compassion, and tolerance. Practitioners try to achieve a state of selflessness and inner balance. It claims to not be a formal organization, have a cost or a membership.

The Chinese Communist Party (CCP) came to see Falun Gong as a threat to it's monopoly. In 1999 Jiang Zemin issued a letter to eradicate Falun Gong. Falun gong practitioners in China have been tortured or have disappeared. The Falun Dafa information center reports that over 3,400 have been killed.

"Falung Gong adherents have been systematically arrested, tortured, sent to forced labor camps for re-education, placed in mental institutions for brainwashing, and subjected to organ harvesting." - Ileana Ros-Lehtinen, Chair of the House of Foreign Affairs Committee

Falun Dafa claims that many of Falun Gong practitioners are being killed for their organs. They claim that: 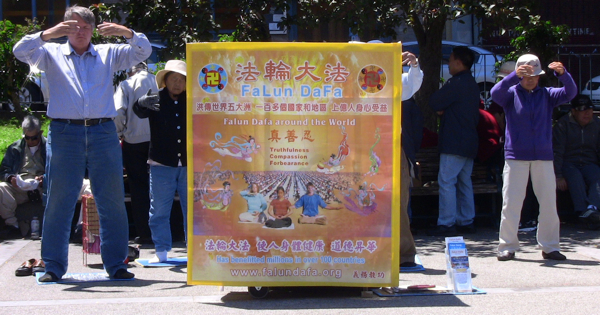 I first came across Falun Gong while living in Shanghai. While there adherents showed pictures of practitioners being tortured and passed out information about the practice. I came across it again here in Chinatown, San Francisco. Here they are doing much of the same thing on Grant Avenue and in Jefferson Park. Adherents solicit people and pass out flyers that talk about the practice and about the persecution in China. One of the flyers also mentions a book that can be bought as well.

I asked an adherent of Falun Gong why the CCP persecutes it and she said it's because the CCP is against the ideas of compassion, tolerance and truthfulness. I wonder also if it is because of it being religious like. The CCP does not tolerate religion.